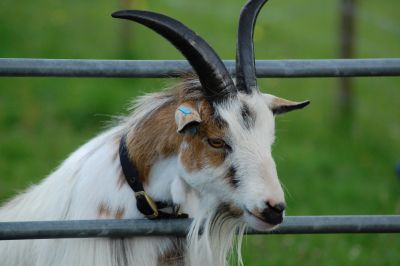 A multitude of difference species of parasites make themselves at home in our goats, some of which can cause significant disease. A systematic way to consider them is by the organs in which they inhabit. The parasites of importance which we will consider live within the gut, liver and the lungs. This article will discuss the different species affecting the goat, clinical signs associated with those species, diagnostics and treatment protocols you can adopt to ensure optimal health and performance from your goats.

Although each species of parasite has a specific life cycle, in general goats pick up the parasites in their infectious immature form, through contaminated pasture. The ingested immature parasite develops into an adult within the goat; these adults begin to lay their eggs which are shed onto the pasture when the goat passes faeces. The life cycle varies in length, gut parasites typically have a life cycle of 16-21 days. This range is a result of differences in temperature and moisture in the environment.

Many worms live happily within the gastrointestinal tract of goats and do not cause a problem. However, species that can cause disease include Haemonchus, Teladosagia and Trichostrongylus which live in the abomasum, one of the fore stomachs of the goat. Trichostrongylus lives within the Small Intestine

Haemonchus: Also called the barber’s pole worm, sucks the goat’s blood and can result in serve anaemia. The goat’s gums and mucus membranes become very pale, it is a very prolific worm and results in very high number of eggs being shed in the faeces.
Teladorsagia: There numbers can build up through late spring and summer, it is the larvae that damages the goats guts which can result in general ill thrift, diarrhoea and death.
Trichostrongyles: Is a small worm that causes black diarrhoea.

Goats due to their browsing feeding habits only develop limited immunity to gut worms. As a results control is necessary in all ages. It is therefore advisable to establish an optimum worm control strategy for each holding. With the aim being to:

Minimise the use of wormers.
To reduce the rate of selection of resistant worms.

It is recommended to routinely perform faecal egg counts; this gives you an indication of the level of infection in your animals, and whether it would be appropriate to treat them. Taking a faecal sample to your vets for testing will give them the information they need to advise you on the most appropriate wormer. Samples should be taken routinely throughout the grazing season.

Grazing management can also help to reduce the worm burden for you goats. For example rotational grazing and shared grazing with other species such as horses to break the worm life cycle.

Goats are highly susceptible to Fasciola hepatica a parasite that lives in the liver. Goats seem unable to develop effective immunity following continual exposure to parasites. Fluke can cause disease by damaging the liver, as the immature parasite burrows through the liver tissue. Clinical signs of infection include: progressive weight loss, anaemia, oedema (build of fluid, typically under the jaw) and sudden death. Fluke is typically seen at the end of September until the end of April. To detect fluke, blood samples can be taken to look for signs of anaemia, low protein and increased liver enzymes. Faecal sample can also be taken to look for eggs.

There are several worms that live in the lungs of goats. Species include Dictyocaulus fillaria and Muellerus capillaries. Clinically when animals are infected they cough, have an increased breathing rate, discharge from their eyes and nose, loose weight and may develop secondary infections. To diagnose infection, again you can bring in a faecal sample to your vets, where they will be able to detect larvae in the faecal material.

Currently on the market there are many different worming products. These can be divided into 5 groups. Different wormers are effective against different types of parasites. It is worth discussing with your vet, what is most appropriate product to use in your own situation. Below is a table with examples of the chemicals available and some of the species they are effective against. The wormers on the market have been developed for sheep and cattle. Because of this it is also worth discussing with your vet appropriate doses to use for your own goats, because they may vary from what the packet suggest for use in its indicated specie.

Goats do not develop immunity to parasites like sheep and cattle, so need life long parasite control. If you have a goat with diarrhoea, parasites are a likely cause.

Routine faecal worm egg counts allow you to monitor the level of infection in your goats and to select appropriate wormers to use and when.

Discuss with your vet what drugs to us when and at what dose.