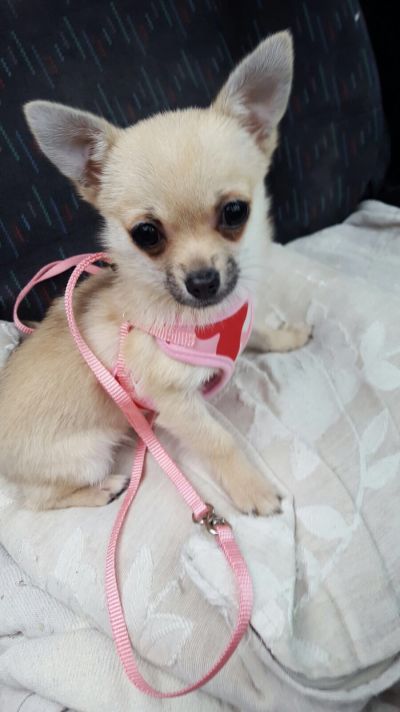 February Pet of the Month: Bella

Going for a walk with your dog on a Sunday is part of our culture, even if your dog is a 1.9kg toy breed.  Bella the lively 1.9kg Chihuahua cross Pomeranian was enjoying her weekend activities, as any dog would, when a freak fall caused a lot of stress for her and her owner.

One minute Bella was fine and then she let out a shriek and was instantly unable to put her front foot to the ground. Despite her owner best efforts to comfort her the lameness did not improve and it was obvious that her weekend walk was going to come to an abrupt end.  Not only was Bella obviously in a lot of pain but her toes on the affected foot also appeared to be pointing in an abnormal direction!

Bella’s owner wasted no time in phoning the vet and took her straight into the surgery.  The abnormal conformation of her toes wasn’t difficult to diagnose and she was immediately admitted for pain relieving medications and X-rays that were performed under sedation.

The X-rays confirmed what everyone suspected.  Bella had fractured 3 of her metacarpal bones in her foot and this in turn allowed the foot to assume a rather abnormal and uncomfortable looking appearance. As such her foot was manipulated into a more normal position and a supportive bandage was applied.  This wasn’t a long term cure but stabilised her condition, and made Bella comfortable, whilst we deliberated what the best course of action would be.

Operating to stabilise 3 fractures to the foot can be tricky, especially if the patient is 1.9kg in weight and the bones are smaller than match sticks.  The size of the bones limited the number of surgical approaches we had and the technique we elected to use was a method where we would insert metal pins into the fractured bones to secure them.  To do this we carefully measured the bones had to select the smallest implants available in order to perform the procedure.

The following day Bella was anaesthetised and we started the surgery to repair her bones. The bones were exposed and the implants were removed from their sterilised packaging in order to inserted into the central cavity of Bella’s little bones.  However, there was a problem. Despite the metal pins being the smallest produced, they were still slightly too large to fit into the bones.

This finding caused some stress to the team during the surgery.  It was a problem that prompted some lateral thinking and the nursing team soon pointed out that our smallest intravenous catheters had a sterile metal insert that was perhaps small enough to fit.  We wanted to try anything and so the team brought through a number of catheters and to our delight the metal inserts were perfect.

Bella’s foot was of course very small which made the surgery was very intricate.  Her small foot also meant that the blood supply was very small and delicate and we had to be very careful in order not to irreparably damage the blood supply and therefore her leg.  The surgery wasn’t quick but X-rays confirmed that the bones had been well aligned.  A light splinted dressing was applied and our next mission was to keep Bella quiet over the next 6 weeks in order for the bones to heal.

Bella visited several times in the following weeks.  She didn’t always appreciate our efforts and so often had to be sedated in order to change her dressings and monitor the progression of her foot.  She was started to bear more and more weight and so finally we sedated Bella, X-rayed the foot again which confirmed the bones had healed, and then performed a minor procedure in order to remove the pins from her bones.

Bella continued to do well and now is very much back to normal now that her Wolverine style pins have been removed.  This is all thanks to the efforts of her doting owner and also due to the out of the box quick thinking of our nursing team.