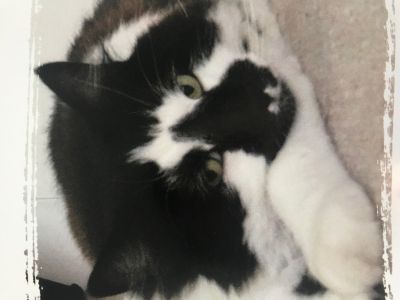 March Pet of the Month: Garfield

On the Saturday morning after ‘The Beast from the East’ had hit Somerset, a small team battled their way into the practice, expecting at least a few emergency patients in need of help. One definite emergency was Garfield the cat. Garfield had been off colour for a couple of days and during the last 24 hours had not been seen to urinate properly - he was passing only very small amounts of blood stained urine. We suspected he might have a blockage. A blockage can rapidly become a major problem as the bladder becomes enlarged and very painful and can prove fatal if it is not diagnosed soon enough.

Thankfully Garfield was still fairly bright and alert although his bladder was very enlarged. He was admitted straight away in order to sedate him and a catheter was passed into his bladder to drain the urine out. We also took x-rays to see whether there were any stones present in his bladder as these can sometimes cause blockages. However, there were no signs of these in Garfield and after his bladder was drained we stitched the catheter in place so that it would remain there for at least the next 24-48 hours.

Blockage of the urinary tract is much more common in male cats than female cats, as the urethra (the tube connecting the kidneys and the bladder) is longer in males. It usually becomes blocked as the result of a stress related syndrome in cats called – Feline Lower Urinary Tract Disorder (FLUTD). The blockage can be just a muscular spasm or caused by uroliths (plugs of material – protein, cells and crystals). When the cat is unable to pass urine they can often be seen going to their litter tray more frequently and straining to go, however they only manage to produce small, often bloody, volumes of urine. The pain caused when trying to pass the urine may cause them to yowl. It is rarely a bacterial infection that causes this condition in cats. In Garfield’s case he’d had a previous episode, which had been milder and had been resolved with anti-inflammatory pain relief. We think it recurred as he was reluctant to go out in the snow to wee!

Once the immediate danger is over and urine is draining from the bladder again, the most important treatment is pain relief. We also often provide drugs to reduce muscle spasm in the urethra. The cat’s ability to pass urine on its own is closely monitored. Garfield was producing urine well over the weekend and on the following Monday he took matters into his own hands by pulling his catheter out himself! He continued to produce normal amounts of urine throughout the day so was sent home that evening.

We have now got an ongoing management plan for Garfield:

This problem is seen relatively frequently in cats and can be really well managed, as long as the signs of blockage are picked up early. Garfield is back home and after a few days of rest and relaxation he is now back to his normal self and enjoying life again.