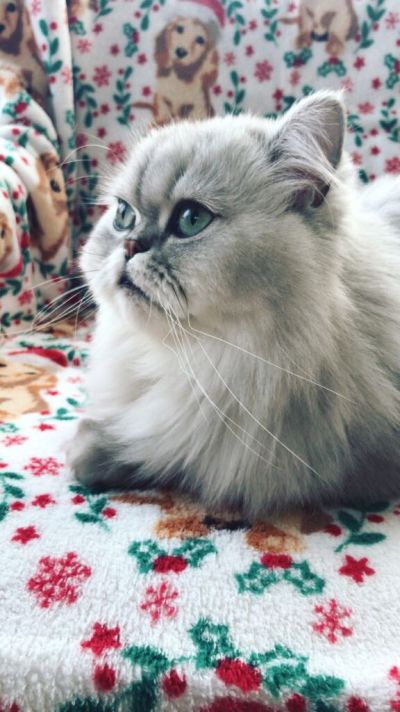 April Pet of the Month: Oscar

Oscar is a rather handsome young Persian and knows it all too well! When he’s not sitting looking pretty he loves nothing more to lie around in the lap of luxury, enjoying the best of a cat’s life. However it came as a shock to him one day when he became ill and was scooped up to be taken into the vets. Oscar ended up with an emergency surgery and a long hospitalisation stay leaving his anxious owners at home missing his presence greatly and urging him to pull through.

Cats can harmlessly vomit occasionally, usually due to a furball or eating too much grass, but when Oscar was repeatedly projectile vomiting one day, his owner brought him to the vet for a check-up as he wasn’t his usual self. Oscar wasn’t the greediest of cats and was known to be picky with his food, but after his bout of vomiting he really didn’t want to eat anything at all, and spent all day lying around quieter than usual.

During his examination he was felt to have an unusual, knobbly area deep in the middle of his belly, which warranted further investigation. Oscar was admitted for an X-ray to gain more information about his condition. The X-ray showed an area of uncertainty in the same place, but this could have been evidence of a bit of constipation. He was comfortable and still reasonably bright, so rather than head straight to surgery to find out more, he was hospitalised overnight with supportive care and an intravenous drip.

The next day, he was a little brighter but the knobbly mass could still be found in the same place by feeling his belly and taking a repeat X-ray. As he was a young, inquisitive cat, there was a possibility that he had eaten something that he shouldn’t have, like string or a toy. With this in mind, and with his owner’s consent, he was taken to theatre to get find out some answers about the unusual area. Once in surgery under anaesthetic, there was a bit of an unexpected finding. Rather than any very hard stools or pieces of toy causing an obstruction, his own intestine was found to be at fault!

Part of Oscar’s intestine had shifted or ‘telescoped’ into the next portion, and got stuck. This is known as an intussusception, and is normally a consequence of an obstruction elsewhere, or can happen with worms or severe diarrhoea in young kittens. However Oscar was regularly wormed and didn’t have any diarrhoea, and his intestines were fully searched for a cause with none found. A possibility could have been something that he had eaten like a plant had caused him to vomit excessively, and this in turn resulted in his condition due to too much movement in his intestines.

Intussusceptions can be very serious and even become fatal if left too long. Oscar was caught in time, but only just, as the bit of intestine that had been caught up in the tangle had started to die off, with the wall turning black and ready to fall apart. This would have been disastrous for Oscar, because his intestinal contents would have leaked in to his belly, causing a life threatening condition known as peritonitis. The only option left to save Oscar was to remove this portion of affected bowel – a risky operation, as the surgery itself could end up causing peritonitis if the stitching didn’t hold when the healthy bowel was put back together.

However, Oscar’s owners wanted to do everything possible to save him, so his surgery was undertaken. Before he was woken up from his anaesthetic, a feeding tube was placed into his stomach, through an incision made in the neck, into the oesophagus or gullet. This would help his recovery, so he could be fed easily, his guts would keep moving and he could get the nutrients he needed to heal. Often cats having this surgery won’t feel like eating for a few days, and especially as Oscar didn’t always have the best appetite, he needed the tube to give him the best chance.

Oscar recovered nicely, and took to the tube feeds really well that were now taking place round the clock by the nurses whilst he was hospitalised throughout the weekend. He built up his strength thanks to the nutrition and eventually began to eat by himself. At this point he was allowed to go home much to the relief of his owners, who were so dedicated as to continue his regular tube feeds at home until he was able to eat his full requirement of calories in a day by himself. The tube also helped with his medication as they could be placed down directly into the stomach. However, he wasn’t out of the woods quite yet, as at any point the surgery in his intestines could fail. Oscar’s owners were on the look out for any signs that could show this, such as more vomiting again, and a swollen, painful belly.