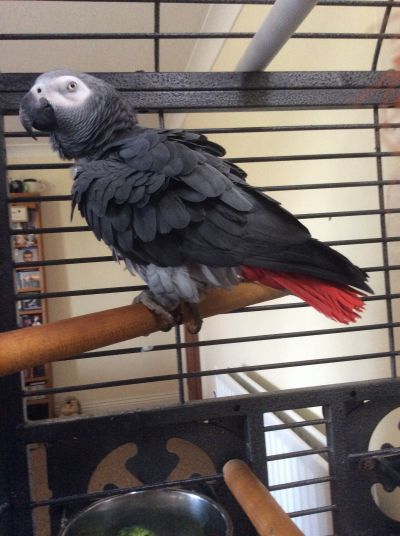 May Pet of the Month: Arry

Birds don’t make up a very large number of our patients at the practice, which makes their visits and appointments all the more interesting. One avian patient that we have grown accustomed to welcoming to the surgery is a 20 year old African Grey parrot – affectionately known as ‘Arry! Having arrived with a history of medical issues, Arry is a regular visitor for check-ups and blood samples to monitor his special condition.

Arry was previously diagnosed with hypocalcaemia, a condition where the calcium levels in the blood are low. This disease is actually quite common among parrots of the African Grey species, and can have serious consequences. As with other animals (and we can see this situation more familiarly in dogs and cattle), a low blood calcium level can lead to tremors, weakness, seizures and even death. Unlike with the dog and cow where the body’s calcium drops in response to lactation following giving birth, it is not currently known why this particular syndrome happens in this species of parrot.

Originally, Arry had been collapsed and fitting, lying on the bottom of his cage, and a blood test had diagnosed him with low calcium levels a couple of years ago. After a series of calcium injections he was stabilised and his food was changed to a more natural fruit and vegetable based diet, with the parrot transitioned onto oral calcium supplements by the time he arrived at the practice.

To ensure he is as stable and healthy as possible, Arry must have his blood calcium measured for monitoring purposes on a regular basis; at least every 6-12 months if he is seeming well. Blood tests are common place and routine in veterinary practice, with dogs and cats the most usual patients, and usually take place quickly and easily with minimal fuss. With birds, and particularly Arry, this is different!

To have his blood sampled quickly and safely, the parrot must be anaesthetised for a short amount of time, long enough to take the blood from a small vein on the inside of his leg. At the same time he is weighed and checked over as the rare opportunity is there for a close up exam. Arry is restrained using a towel and gauntlet gloves within this travel cage in a darkened room but doesn’t tend to go quietly! A mask is then placed over his beak to deliver the anaesthetic gas.

Once left quietly in his cage to recover he is discharged to make the journey home where Arry’s owners await the results after a couple of days once the results have been analysed at a specialist laboratory for exotic species. On most occasions his blood calcium levels have been stable, sitting just below the normal reference range for a parrot, but this is acceptable for Arry’s condition. However, at times when the result is lower than required, further investigations may have to be performed, such as more thorough blood tests. When his blood calcium dropped to a significantly low point and was not improving, he was X-rayed to ensure that his bones were OK (and not using excess calcium) and that there was no egg inside of him (in some species of parrot it can be difficult to tell apart their genders).

After a few tweaks to his routine at home which involved helping him take his supplements better, in tastier food or his water, increasing the length of time his special UV light was switched on, and ensuring he experienced more hours of natural sunlight by moving the position of his cage, Arry’s calcium recently returned to normal levels (for him at least) and we now look forward to his next exciting monitoring visit later in the year.