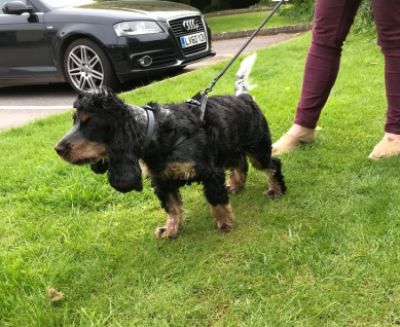 June Pet of the Month: Stanley

Puppies are extremely inquisitive and curious, and as such will often eat things they shouldn’t do (as many owners know all too well!). Because of this it is not unusual for us to see many puppies for digestive upsets such as vomiting and diarrhoea.

When Stanley, a 5 and a half month old Cocker Spaniel, initially presented with diarrhoea and a slight temperature he began treatment for a routine digestive infection, which would resolve the vast majority of these cases. His diarrhoea had been ongoing for around 3 days and he was quiet in himself. After beginning treatment he seemed to decline over the course of the day and became very uncomfortable, so was admitted for a blood sample and an x-ray to determine if anything more serious may have been going on.

The x-ray showed no abnormalities in the abdomen but the blood test showed a moderate increase in some of Stanley’s white blood cells, suggestive of an infection or inflammation somewhere. Stanley then began to develop quite severe discomfort initially around the head and neck area. Discomfort of the head and neck is particularly worrisome as it can indicate the presence of life-threatening meningitis, especially in the presence of a persistently high temperature. Clearly this was not as straight forward as simple diarrhoea in a puppy. Due to these newly developed symptoms further tests needed to be performed.

The best way to rule out meningitis is by taking a sample of spinal fluid, known as a CSF sample. This is done with extreme care while the animal is under anaesthetic and involves passing a needle very carefully into a gap in the spinal column to collect this fluid surrounding the brain and spinal cord. Thankfully this CSF fluid came back as negative, allowing us to rule out meningitis. The next area to therefore look at were the forelimbs, as Stanley was also showing considerable discomfort when these were examined, especially at both his shoulders and the glands (or lymph nodes) associated with the front legs were enlarged.

X-rays were taken of both shoulders and elbow joints to assess for any obvious bony abnormalities or which none were seen. Samples were then taken of the joint fluid within these joints to assess for inflammation, which by definition would give the unusual diagnosis of arthritis in a puppy. Arthritis is a condition commonly seen in our older patients caused by wear and tear of the joint cartilage over time and so to see it in young animals is much more uncommon and due to factors other than just routine wear and tear. The joint fluid samples showed large numbers of white blood cells present but with no bacteria of other infectious agents seen. So we had finally identified where Stanley’s problem was – his joints. The neck pain would have been explained by inflamed joints of the spine as opposed to meningitis.

As no infectious causes were seen it was highly likely Stanley had a condition known as immune-mediated poly-arthritis (IMPA), which effectively means his own immune system was attacking his joints. This causes the joints to become inflamed and painful, and also causes a temperature. Luckily, similarly to other immune conditions, IMPA is treatable. Stanley was begun on a course of immunosuppressive steroids to prevent his immune system from mounting such an attack and he will be kept on this for a number of months, before slowly being weaned off.  If the medications are stopped too quickly there is a very real chance of a relapse. Shortly after the diagnosis Stanley developed a cough and some breathing difficulties and so was transferred to Langford hospital in Bristol for 24hour surveillance before going home a few days later.

Stanley is doing extremely well and is running around again pain free! He has currently had his steroid dose reduced once already with the aim to reduce it again in a couple of weeks. He is once again doing all the things normal healthy puppies should do!