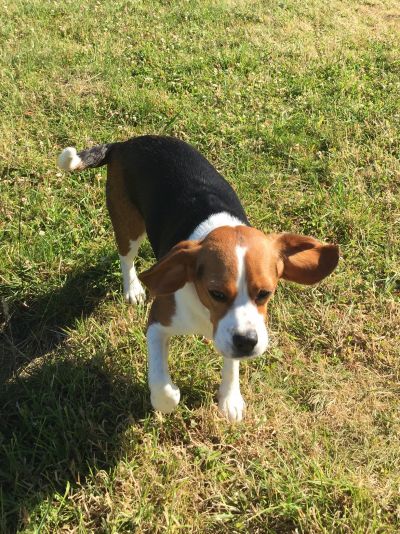 Charly gets into trouble on the farm

In a busy mixed practice, we have to expect that the phone can ring at any moment with an emergency. And when it’s our farm office that receives an urgent call from a farmer, we can usually be pretty sure the problem is with a cow or a sheep. But this was not the case with the call that started this story, and the result required collaboration across both farm and pet teams.

One of our farm clients called in one afternoon to say that his herdsman’s dog had been found chewing a ruminant bolus. A bolus is a slow-release device that is placed into a cow’s rumen to provide long term medication. In this case, a bolus had most likely been regurgitated in a field and then discovered by the inquisitive dog. Our farm admin staff quickly ascertained that the bolus contained a medication called monensin, an antibiotic, and also the total quantity contained within an bolus.

Although this is not a common problem and the toxicity of monensin to dogs is not well known, our farm vets knew that this could well be a serious issue and so advised that the dog was brought in immediately. The dog’s owner set off to Shepton straight away, while our farm team spoke to our small animal vets. Luckily, and thanks to everyone’s swift action, we were on track to see the dog at the practice within 30 minutes of ingestion.

Our pets team began to prepare, and our first priority was to gain the right information. As a practice, we subscribe to the Veterinary Poisons Information Service, a national database and expert panel who are available to advise us on the management of potential poisoning cases. While we are experienced in dealing with the more common poisons encountered in dogs and cats, the VPIS is invaluable in cases such as this, when a less common intoxication is involved.

One call to the VPIS confirmed our worst fears, that this could potentially be a serious poisoning case. Not only is monensin quite toxic to dogs, but the significant quantities used within a bolus, necessary to treat a full-sized adult cow, would result in a massive dose for a dog. The few case reports that existed did not have positive outcomes. We were advised that intoxication could result in hypovolaemic shock and kidney failure, which was likely to develop suddenly after a delay. In short, dogs can appear fine for several hours after ingestion and then become very ill, very suddenly. The good news was that there was treatment that we could give which could help, as long as we acted quickly.  We had everything prepared and several of our team were briefed on the plan – we now just had to wait.

At this stage, we had no information about the dog in question. We had not seen her before as she was registered with a veterinary practice closer to her home.  When the door opened we finally met Charly, an 18 month old Beagle/Cavalier cross. With her constantly wagging tail and energetic enthusiasm, Charly won us all over at first sight – all we wanted to do was make a big fuss of her, but we knew there was no time to lose.

Before any pleasantries, we had a brief conversation with Charly’s owner to explain that we needed to induce vomiting as a matter of urgency. While her owner was understandably taken aback she trusted what we said and let us whisk her away. She was given a quick injection of an emetic and left in the care of our nursing team while we obtained a full history and explained the situation to her owner. We agreed there and then that Charly should be admitted for treatment to help eliminate the monensin from her system and manage any potential adverse effects.

When we brought Charly back to her owner for a quick kiss goodbye, she was looking a bit sorry for herself. We couldn’t blame her really, as she had been sick 7 times at this point. Luckily though, she had brought up some of the bolus, so we could be happy that some of the drug had been eliminated from her system. Once her owner had tearfully waved goodbye, Charly was fed some activated charcoal – not the most enjoyable meal, and a pretty messy one at that, but this could help bind any more of the monensin that remained in her stomach.

Finally, Charly had a blood sample taken and was placed on an intravenous infusion of a special lipid solution, which would hopefully absorb any monensin that had been taken up into her circulation. After all this, Charly looked thoroughly fed up and we all felt very sorry for her. At last, she got the cuddles we wanted to give her and she could relax in a kennel. Her blood results showed that she was doing well at this stage. She just needed time for the lipid infusion to do its job.

After a quiet night, and regular checks from our on call team, Charly was back to her bouncy self and her blood tests were still good. Our information from VPIS suggested that if she was not showing symptoms at this point then she was most likely out of danger. Charly could go home, and her owner was given strict instructions to contact us if there was any sign of illness.

Charly only spent about 24 hours with us, but she won us all over in that time with her fun and friendly character. She underwent significant treatment during her stay and multiple team members, across both departments, played their role in this. Above all, her owner’s swift actions and commitment to Charly’s best interests ensured she got the treatment she needed quickly, which likely saved her life.