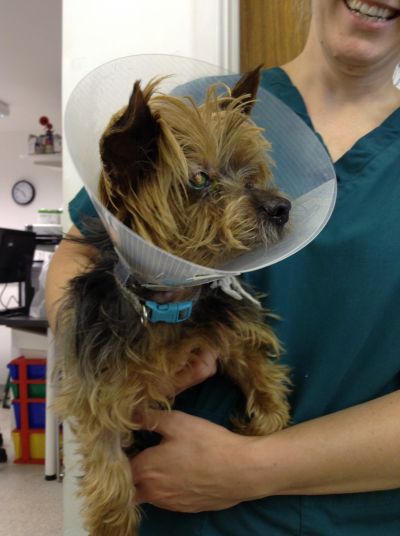 Tetley has a sore eye

We quite often see dogs and cats with sore eyes at the surgery, and the cause can vary from a mild conjunctivitis to a serious problem that can even lead to the loss of an eye so they always warrant a check .

Recently, Vet Josh saw Tetley who is a sprightly older gentleman, with an uncomfortable eye caused by a corneal ulcer. The cornea is the clear outer layer of the eye, and it is very painful if damaged. It’s structured in layers – a bit like an onion with an inner and outer membrane and in total is approximately half a millimetre thick. When we examine them, a special stain is placed in the eye which sticks to the damaged cornea and fluoresces under white or blue light. Most ulcers heal well in a few days, but deep or infected ulcers, as well as those in certain breeds of dog can be very problematic - partly because the cornea does not have its own blood supply - and need surgery.

Tetley’s ulcer was quite deep so Josh gave him some appropriate medication, and then arranged to see him in a few days to check the eye was healing as we would expect.  Unfortunately, the ulcer had not changed, despite Tetley being very good for his eye drops and medicine, so Josh sedated him and performed a procedure whereby a series of very fine scratches are made across the surface of the eye with a sterile needle in a grid form. This helps the new corneal tissue that grows to ‘stick’ to the deeper layers and so allow healing.

By the next week, it was clear that rather than improve, Tetley’s ulcer had deepened. Worryingly, the centre was no longer taking up the special stain, ringing alarm bells that it was down to the inner membrane of the cornea. Once this happens, there is a real worry that this area of severely weakened cornea could rupture, which would have lead to Tetley losing his eye. After speaking to his concerned owner, Vet Sarah agreed to perform a much trickier operation to give him the chance to keep his eye.

Under general anaesthetic, a section of conjunctiva was carefully cut from the top surface of the eyeball, keeping an attachment on one side. This was then rotated round so that the conjunctival graft covered the damaged area of cornea. Then the really fiddly part – the graft was sutured to the cornea using a specially flattened needle that glides through those onion-like layers in the cornea, with a suture material that is as fine as a human hair. After several stitches, the graft was nicely in place and Tetley was woken up and later able to return home. As the graft stays attached to the cornea, as well as acting as a bandage, the blood vessels in the conjunctiva help the underlying defect to heal.

At post-op check ups, Tetley has been doing well. At first he had to wear an ‘Elizabethan collar’ to make sure he didn’t scratch at his eye as you can see in the picture, but he has been allowed to have that off now.

In the future, the graft can remain fully in place which will stop him seeing really well out of that eye, or, under sedation, the ‘stem’ to the attachment can be cut so the remaining patch will gradually become more see-through. As Tetley is an older boy, we may not put him through further procedures if he is comfortable and happy with his new pirate-like eye.