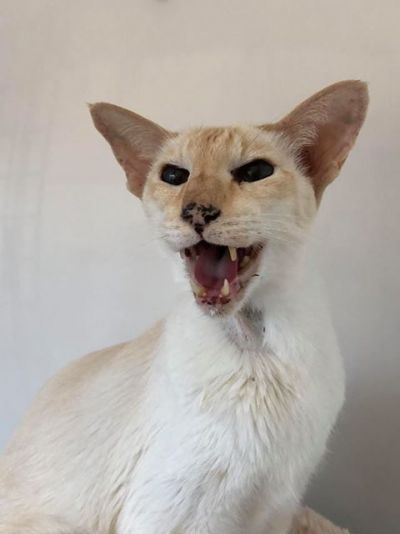 August Pet of the Month: Crumble

Siamese cats are well known for their chatty personality, with a loud miaow asking for attention and affection as often as possible! So when Crumble the 11 year old Siamese started losing his voice and sparkle during a bout of sickness, everyone was determined to bring it back for him.

Unfortunately Crumble was no stranger to illness and had spent several days in the practice a few years ago when he was diagnosed with pancreatitis. Pancreatitis occurs when the pancreas, an organ involved in digestion of meals, becomes inflamed. This can be painful, cause vomiting and diarrhoea, as well as a complete loss of appetite. After some days and nights hospitalised with an intravenous fluid drip and supportive anti-sickness and pain relief medication, he was successfully treated. However pancreatitis can be a recurrent syndrome and he was always at risk of it happening again.

This time, Crumble started being sick when he was picked up from the cattery, and was refusing food. When the usual anti-sickness injections didn’t bring his appetite back, he started becoming dehydrated and quieter without the distinctive miaow we had come to know, so needed to be hospitalised at the practice again. A blood sample confirmed suspicions that Crumble was suffering from pancreatitis once more, and the same treatment plan was started for him again.

However, this time, after a few days his appetite was still not returning. Crumble became brighter in his self, more talkative and much better hydrated but would still turn his nose up at food despite his owners regular visits. He had lost quite a bit of weight by now and needed to get some nutrition to prevent his body shutting down. The best way to feed Crumble at this stage was to place a feeding tube that would lead into the stomach. Under an anaesthetic, the tube was inserted through the skin at the top of the neck to sit at the bottom of the oesophagus, or gullet. The tube then is stitched to the skin and bandaged in place and Crumble was ready to receive his first meals of liquidised food.

At this point, Crumble was expected to go from strength to strength but his condition deteriorated to make his treatment plan a lot more complex. After each meal from the tube, Crumble would salivate excessively and appear uncomfortable, despite the feed tube double checked as being in the right place and free of complications. In addition, he had developed a really snotty nose as thick mucus appeared in first one and then both nostrils, which would crust up and block his airways. Antibiotics were started as well as a powder to break up the mucus, and his nose was cleaned as often as possible, but his breathing actually got worse, and his chest movements became very laboured. Whilst all of this began to take hold of his body, Crumble became so weak that he could no longer hold his head up or respond with even the quietest miaow.

At this point drastic action needed to be taken and euthanasia had become a real possibility; there was such shock and dismay at the speed of this unexpected downturn in his fortunes. Crumble’s owner wanted to give him as much chance as possible and stuck by him while hope remained – although the likelihood of recovery was decreasing with each passing hour. A scan of his heart was performed which showed that he had tipped into heart failure after now becoming overloaded with fluid. Injections of a diuretic were then given repeatedly in a bid to reduce the pressure on the heart and help settle his breathing. The intravenous drip was put on hold and medication was instead given into his feeding tube. A blood sample also demonstrated a very low level of the mineral potassium in his body and action was needed to correct this by supplying extra potassium into his system.

Low potassium causes muscle weakness and in this case appeared to be due to Crumble’s body being unable to cope with the sudden arrival of food into his system. A large surge of insulin was released via the pancreas, probably more so due to his pancreatitis episode, which in turn lowered his potassium. This explained why he had become so weak and lifeless. Potassium supplements were given through his feeding tube in attempt to get him to turn the corner as he couldn’t last much longer being this weak.

Crumble’s mucus and breathing began to improve with the extra medications but his potassium levels were not rising as hoped and he was still very limp. There was one final option to help save Crumble – he needed an intravenous infusion of potassium, however this was not without significant risk. This would put pressure back onto his recovering heart, and the high levels of potassium Crumble needed could potentially stop the heart altogether. After weighing up the risks, the infusion was given over a few hours and all everybody could do was wait.

The next day though, things started to look up and Crumble began to lift his head. Then the miaow – his chatty voice was returning, and after a couple more days, Crumble was back to feeling quite good again. The concentration turned back to getting him to eat, and after many visits from his owner to groom him, comfort him and tempt him to eat, Crumble started to lick off a small amount of food that his patient owner had smeared onto his feet. From this point the only way was up and he was strong enough to return home as his appetite returned. Crumble’s owner still needed to give him tube feeds until he was eating his full requirement of food, but five days after leaving the practice, Crumble could finally have his tube removed! To see Crumble get gradually back to his chatty best after almost entering the point of no return was so rewarding for everyone involved in his care, and was in no small part down to the perseverance of his dedicated owner. Crumble is one loved Siamese, both at home, and within the practice!