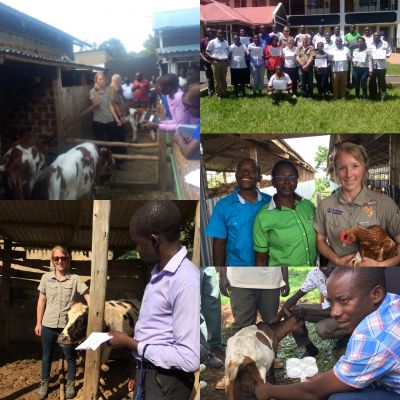 Anna trains farmers in Africa with Send a Cow

Shepton Vets is a member of XLVets; this means it is part of a group of 50 or so independently owned veterinary practices that work together, sharing knowledge and experience.  One of the great things about working for a practice that is a member of XLVets is the opportunities that arise as a result of being part of this large community of vets.

I have just returned from my second trip to Africa.  Both of these trips have been arranged through Farm Skills Africa, a project set up by XLVets that sends vets to Africa to provide training to farmers.  Over the last 18 months XLVets have been fundraising for the charity Send a Cow. The money raised is being used to send vets to Africa to train Send a Cow staff and I was lucky enough to be part of this training.

In May I spent two weeks in Kenya with Rod Wood, from Shropshire Farm Vets (a fellow XLVets practice).  We were based in Western Kenya in Busia county, not far from Lake Victoria.  We were training a group of 18 Send a Cow staff from 6 different East Africa countries.   Fortunately most trainees could speak English and unlike my last trip to Africa we did not need translators.  Our base was a convent, where we were very well looked after by the sisters.   We certainly tasted some African cuisine!  One of my lasting memories is the Ugali, or maize meal, a filler, that looks like mashed potato but tasted like wallpaper paste!  It consisted of maize, water and flour and is not something I have missed since being home. We visited in the peak of rainy season, mornings tended to be warm and sunny then by mid afternoon the clouds would turn black and there would be several hours of torrential rain and often thunder and lightening.  This invariably resulted in some roads becoming impassable, long power cuts and a deluge of muddy water everywhere! Rainy seasons are becoming less predicable, 2017 saw a drought whereas 2018 had brought extremely long, heavy rains resulting in dams bursting, flooding and subsequent destruction of houses and crops.

We tried to make the training as practical as possible.  Often we would spend a few hours in the classroom in the morning before going out into the field and visiting a variety of different farms.  We were the 4th pair of XLVets to carry out training and some of the participants had attended previous trainings and so the level of knowledge was quite high.  Previous vets had focused on cattle husbandry, we were asked to extend training to other species including chickens, goats and donkeys.  The focus of much of our training was how to keep happy, healthy, productive animals when resources are limited.  We also spent time improving the communication and training skills of the staff, the aim of this to help them when delivering information and feeding back to farmers.

Send A Cow celebrates its 30th birthday this year, the charity was originally set up by a group of local farmers in 1988 who send some of their own cows to Uganda.  A lot has changed since then and cows are no longer sent from the UK, instead they are sourced locally.  Goats and chickens are also placed, often in the most disadvantaged communities.  Providing livestock is just a tiny bit of what Send a Cow does.  Farmers are helped to identify and utilise the resources they already have and are given training in sustainable crop and vegetable growing.   This often not only improves the quality of life of that individual and their family but also helps the whole community. During our two weeks we met so many people whose lives had been turned around by Send a Cow.  It was a privilege to work with such an enthusiastic people and from the feedback session at the end of the fortnight it was clear they had learned a lot.  We too also learned a lot and it was an experience I shall never forget.

I would like to thank the pharmaceutical company Boehringer Ingelheim for their generous financial support for this project.