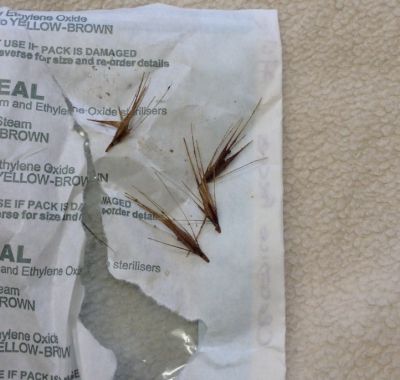 [Text Box: The 4 grass seeds removed from Barney’s ear. Notice the long strands which often prevent backwards movement of the seeds.] As all dog and cat owners know, this time of year is rife with potential problems our companions encounter from their outdoor activities. During the summer months when dog walking is at its highest and they are able to enjoy running around fields and forests, we see a dramatic increase in certain issues being presented to us. Most noticeably these include cuts and scrapes, ticks, insect bites and often grass seeds. Barney is a nearly 11 year old Springer spaniel who came in a couple of weeks ago because his owners had noticed he had been shaking his head and was painful when touching his right ear. Such signs can usually be explained by one of a few problems – a skin allergy affecting the ears causing itching, an ear infection, or something lodged down the ear. To determine which of these it was we had to have a look down barneys ears using a piece of equipment called an otoscope, something I’m sure many of you have seen us using when bringing in your pets to have their ears examined. Whilst Barney’s left ear appeared all ok, when looking down his right ear there appeared to be a large amount of discharge present and he was extremely uncomfortable. There were also a few strands of what looked to be a grass seed present. Because of this we opted to sedate Barney to have a more thorough look and remove any lodged seeds. A routine sedation was used as Barney was otherwise healthy and a more extensive visualisation was performed. A long thin grasping instrument was passed carefully down the ear canal whilst the otoscope was used, and the strands of grass seed grasped to remove it in its entirety. After removal the ear was examined again and another grass seed was seen which was also removed. And another. And another! All in all Barney had 4 grass seeds down his right ear, the most I and any of my colleagues have ever seen in one go. I’m sure Barney had a great time running and rolling in the long grass before the seeds got lodged! Because of the structure of grass seeds, once they get stuck somewhere they are often unable to make their own way out because the barbs prevent them passing backwards, hence intervention is required. After removal the ear was completely cleaned and one final examination was performed, which led to one more issue, Barney’s eardrum had burst from the trauma of the grass seeds. This often isn’t as dramatic as it sounds, as with appropriate treatment the eardrum often heals by itself. If left however the grass seeds could have travelled past the eardrum and into the deeper parts of the ear which can cause real problems. Barney was given antibiotic tablets as infections often result from grass seed presence and ear cleaner to be used daily to clear up any discharges. He recovered very well from his sedation and ear issues and is now back to full health.

Ears aren’t the only parts of an animal that can fall victim to grass seeds, another very common site is in the foot, where grass seeds can become lodged on the bottom or more often between the toes. When this happens the animal commonly presents as lame and with a local swelling of the foot. Sometimes seeds and thorns make small puncture holes in the skin but do not become lodged; they may however still leave behind an infection which can be treated with appropriate antibiotics. If the area and swelling does not respond to the antibiotics and/or there is a high suspicion that a thorn or a seed is still present within the foot they have to be surgically removed to prevent movement of the seed up the leg and continual infection. This can involve sedation or an anaesthetic depending on how deeply lodged they might be. We then cut over the area the seed is suspected and look around to try and find it. Once removed the animals recover very well.

So remember, always be aware of the possible risks posed by grass seeds, especially at the ears and paws,  and make sure to check your animal if you are at all concerned.