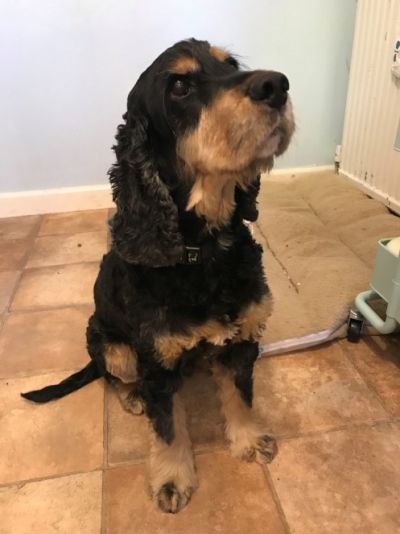 Almost all breeds of animals are prone to developing certain conditions throughout their life due to the specific genetics of individual breeds. For example, Cavalier King Charles Spaniels often develop heart murmurs in their old age, and Persian cats may be more likely to develop kidney issues at a young age. The unusually named Nova Scotia Duck Tolling retriever has a predisposition to developing diseases where it’s own immune system attacks parts of its body, known as autoimmune diseases.

In the Nova Scotia this predisposition can be traced back to two outbreaks of Distemper virus in the early 19th Century which almost wiped out the entire breed. Those that survived did so because of a heightened immune system which has been passed down through the subsequent generations leading to their autoimmune predisposition. In fact, all Nova Scotia’s to date can trace their ancestry back to just 9 Pedigree dogs!

Dash Dickinson is a 10 year old cocker spaniel whose owners were visiting family here in Somerset when he was brought into us as he was found lying outside in the morning and vomiting, and not wanting to move out from the hedge. One of the first thoughts when seeing a cocker spaniel is the possibility of autoimmune conditions, like those seen in the Nova Scotia. On examination Dash was noticeably uncomfortable in the front of his abdomen and had a high heart rate and temperature. These signs, along with the vomiting, suggested either severe digestive infection, a blockage in his intestines, or a condition known as pancreatitis (an extremely painful condition where the pancreas becomes inflamed).

Dash was admitted and blood tests and imaging performed. X-rays ruled out a blockage and the blood tests suggested pancreatitis – this was all but confirmed on an abdominal scan with the pancreas looking abnormal and being surrounding by inflammation. Pancreatitis can be one of the most painful conditions we encounter in veterinary medicine and so potent pain relief is essential. Dash was started on a combination of Morphine, Ketamine and a drug called Lidocaine and immediately become much more comfortable. There is no magic injection or tablet which can cure pancreatitis, and treatment consists mostly of supportive care while the pancreas settles back down. This includes potent pain relief, IV fluids, and trying to get them to eat as soon as possible, which can sometimes be difficult. Pancreatitis is a condition we see fairly commonly in practice and can be fatal, however its cause is often unknown.

It has been linked to certain underlying hormonal conditions such Cushings, high fat diets and high blood fat levels, however causes in most cases remain undetermined. Because of the high incidence of autoimmune disease in cocker spaniels, it has been identified that cocker spaniels can suffer from a very specific type of pancreatitis where the immune system attacks the pancreatic tissue, a type of pancreatitis which to date has only been seen only in this breed. To determine whether this was true in Dash we checked other organs to see if an overactive immune system was affecting these also. Interestingly it turned out Dash’s tear glands were being affected, causing a condition called Dry eye. On top of this his kidneys were involved, leading to protein loss in the urine. So his immune system appeared to be attacking his pancreas, tears glands and kidneys!

After hospitalisation for a couple of days, Dash finally started to eat, just before we were going to place a feeding tube. Fake tears were given and Dash continued to recover and eat by himself as the pancreas settled down. As the owners actually lived in Devon, he was checked again at his regular vets and continued to do well. We re-checked him at Shepton a few weeks later to re-assess his eyes and kidneys now that his pancreatitis had resolved. Tear production in both eyes now registered as normal and the kidneys were back to normal functioning so all was cured. Or so we thought. Having discussed with the owners further, they had noticed that Dash was drinking more than normal, however they also said that this seemed to be the case prior to the pancreatitis episode. A quick urine checked showed that his urine was much more dilute than normal, but bloods showed his kidneys were working fine.

I am suspicious that Dash may indeed have Cushings, one of the conditions known to be associated with pancreatitis, and that this was involved in triggering his pancreatitis episode. Cushing’s is where the adrenal glands produce too much natural steroid hormone in the body, causing increased drinking, eating and sometimes hair loss and muscle weakness. As it stands Dash is having a few weeks at home to see if the drinking resolves. If not Cushing’s disease might be tested for, which if positive, is highly treatable and will be the last piece of the puzzle in this interesting medical case.