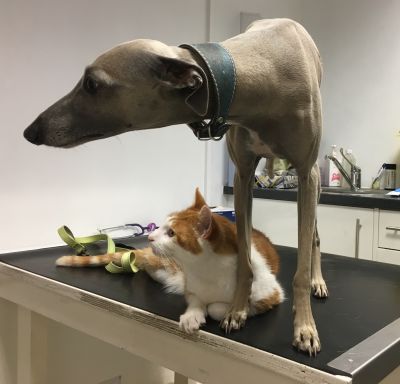 Ollie & Tashi cause their owners concern

When owners need to bring their pets to see us, we know it can be a stressful time. We understand that, in all honesty, our clients would rather not be at the vets with a poorly pet. So we hope these upsetting episodes are single, isolated events that we can make as low-stress as possible and deal with as a one-off. However, the owners of Tashi and Ollie were unfortunate enough to have two such stressful events back to back!

It all started one Friday when the owners were returning home from a busy week, hoping to settle in for a well-earned rest.  However, that evening they witnessed their cat, Tashi, get clipped by a passing car.  Their immediate alarm was somewhat relieved as they saw Tashi scurry away apparently just startled.  They checked him over and, although obviously distressed, he appeared fine in himself, making it clear he just wanted to settle down for a rest.

After a night’s rest Tashi seemed very bright and had recovered from the stress of his encounter with a car but his owners were quite concerned that he seemed uncomfortable on one of his back legs and did not want to put it down.  With this development they knew that Tashi needed to be brought in and checked over. And once we saw him we were concerned enough about the leg that Tashi was admitted for X-rays that day.

The X-rays confirmed that Tashi had indeed damaged and dislocated his hip.  These injuries can be difficult to manage. Sometimes we can replace the hip and keep it in place long enough for the soft tissues to heal and stabilise the joint. However, as can often be the case, Tashi’s hip was very difficult to replace in the joint socket and repeatedly dislocated.

We discussed the treatment options with his owners and, as Tashi is a very active cat that was unlikely to enjoy protracted management, we decided that a swift resolution to his condition was preferable. We opted to perform a femoral head and neck ostectomy – a surgical procedure in which the ‘ball’ of the hip joint is cut off the femur and removed. It is this part of the joint which could not be replaced into the socket in Tashi’s case and, once it is removed, the body is able to reform a ‘false joint’ through tightening of the muscles and ligaments that remain. Although this sounds drastic, this procedure can have great results, especially in cats, being naturally light on their feet.

With Tashi recovering well from his surgery, his owners felt they could breathe a sigh of relief and look forward to the end of their regular vet visits. They could never have predicted that a normal walk with their dog, Ollie the Italian Greyhound, would see them making yet another stressful emergency trip to see us.

Ollie was enjoying his usual stroll when he snagged his back on a barbed wire fence. This would have resulted in a minor cut but unfortunately Ollie reacted and became very agitated, trying to pull away. As he is a thin-skinned breed the result was disastrous, as he tore his skin from one side of his flank to the other. Luckily, his owner kept incredibly calm, managed to free Ollie and calm him down, then got him straight to the surgery.

Ollie was very distressed and would most certainly have been in considerable pain. We admitted him immediately, gave him pain-relief and sedatives, and once he had settled we progressed to give him a general anaesthetic so that we could fully assess the wound.

Ollie’s injury was one of the largest skin wounds any of us had ever seen, and was going to be difficult to manage. First we applied a local anaesthetic gel to the entire wound – this would protect it from contamination with dirt and hair as we clipped the surrounding fur, and also start to numb the tissue to provide extra pain relief. We then flushed and cleaned the wound before we started to close it. Luckily we were able to fully close Ollie’s wound, with several layers of suture material and a lengthy surgery. However, as the wound was so extensive we knew it was likely to produce a lot of fluid, which could collect under the skin and complicate the healing process. So we placed drains within the wound – silicone tubes which exit through holes in the skin, allowing any fluid to drain away.

Ollie recovered well but was only truly happy when he saw his owners arrive to collect him.  Once again they had another patient to take care of at home and, once again, they did it exceedingly well, keeping Ollie rested and cleaning his drain sites daily. Two weeks later, they returned to the surgery with Ollie and Tashi, this time together, for their final sign-off examinations.  Tashi’s hip was doing well, with him simply needing to build up his muscle and strengthen his leg.  And, for Ollie, the sutures were all removed as his wound had healed fantastically well, so that he could finally go out for a walk again – thankfully this time without incident!