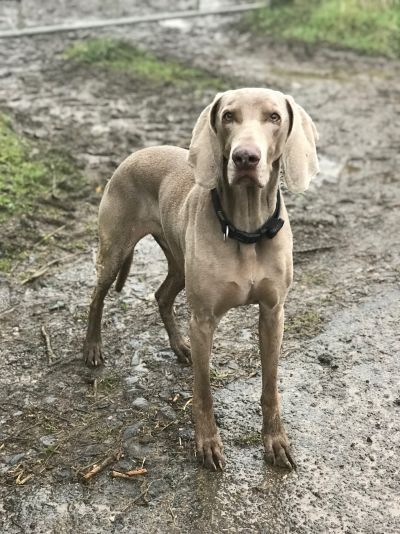 October Pet of the Month: Theo

Theo is a 10 year old male neutered Weimaraner. One Friday evening he had enjoyed his dinner as normal but, within a few hours, it became clear that he was feeling really unwell. He was retching and trying to be sick and his abdomen was swelling up.

As soon as his owners realised that he was ill, they rang our out of hours service and we immediately arranged to see Theo suspecting a twisted stomach – otherwise known as a gastric dilatation volvulus.

This condition can occur in many breeds of dog but typically affects larger breeds especially if they have a deep chest such as Great Danes and German Shepherds. It can occur if the dog exercises after a large meal but can occur even without this history. The stomach sits just behind the liver in the abdomen and is attached at the front to the oesophagus and at the end to the small intestine and the spleen is attached down one side.

If the stomach gets full with food, fluid or gas it can twist around itself and this then stops anything leaving the stomach in either direction and it continues to swell as more gas forms and more fluid is secreted by the stomach lining. This quickly becomes very painful as the stomach distends and the dog starts trying to vomit unsuccessfully. The blood pressure drops quickly and the stomach starts to lose its blood supply.

We initially carried out an ultrasound scan of Theo’s abdomen and could visualise a very enlarged spleen and lots of food in his stomach. Because his owners had acted so quickly his abdomen was not that distended but tapping the side of this abdomen produced the typical ‘ping’ associated with gas trapped in the stomach. We also attempted to pass a stomach tube down his throat but the twist prevented it entering the stomach and so the only other option available was surgery. We were still unsure if there were any other problems inside Theo’s abdomen but decided to take him to surgery to treat the torsion and investigate further.

We put Theo on to high flow intravenous fluids to support his blood pressure and anaesthetised him. At surgery we discovered that his stomach was twisted and this had blocked off the outflow from his spleen causing it to swell to over 5 times it’s usual size. We gradually corrected the twist and moved the stomach and attached spleen back in to its normal position. We were then able to pass a stomach tube down his oesophagus so that we could syphen off the stomach contents and reduce the pressure on the stomach wall.

Once Theo was more stable we could see that his stomach was returning to a normal pink colour – it had turned purple due to the restriction on it’s blood supply – and his spleen reduced back down to it’s normal size. We also checked the rest of his abdomen to look for any other abnormalities but everything appeared normal. We then stitched the outer layer of the stomach to the internal muscle of the body wall to ‘anchor’ the stomach so that it could not twist again in the future.

Luckily Theo’s stomach was not damaged by the temporary lack of normal blood supply and recovered fully. Unfortunately this is not always the case and the stomach can be damaged beyond repair. The drop in blood pressure can also lead to death if not corrected quickly enough.

Theo had some post operative bleeding from his abdominal wound but this soon resolved and he was back home and eating a few days after his operation. Despite everything he had gone through Theo remained really friendly with us and loved his cuddles and was still happy to come back and visit us. He has since made a full recovery and is back to his normal happy personality.