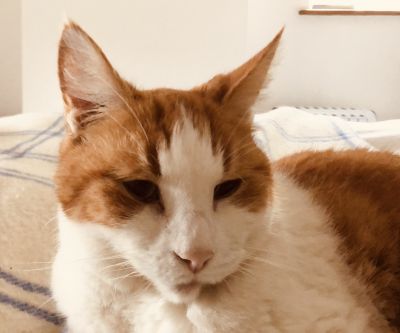 December Pet of the Month: Philip

Elderly cats often need to be cared for and monitored more closely in their twilight years compared to their younger more care free days. When cats reach the milestone of 11 years old, they are classed as a ‘senior’ patient and can be vulnerable to several age related conditions such as hyperthyroidism, kidney disease, and diabetes mellitus, to name a few of the most common illnesses. Geriatric feline medicine is therefore very important, and the significance of an annual health check becomes greater – as Philip the sixteen year old moggy and his dedicated owners are more than aware of by now!

Whilst in for his annual health check and vaccination two years ago, Philip’s owners commented that he had been drinking a bit more than usual. Already well aware of causes of increased thirst in older cats, having owned two previous elderly hyperthyroid cats that were thirstier than normal, his owners were keen for a blood test, to check thyroid levels as well as a basic geriatric screening. Philip’s blood sample was taken after his vaccination appointment, and the results suggested that his kidneys were struggling with age related change. A urine sample was required to confirm a diagnosis of chronic kidney disease.

Unfortunately Philip wasn’t obliging enough to provide a sample of his own doing, so after a while of waiting we performed a ‘cystocentesis’ procedure – to extract urine from the bladder via a needle and syringe, much like obtaining a blood sample. This result then confirmed Philip’s kidney disease, as his urine was inappropriately diluted – the kidneys had lost their ability to concentrate and filter effectively. Following this diagnosis, Philip was provided with a special prescription diet to eat which has a reduced, but high quality level of protein, low salt and low phosphate content, to help manage his kidney troubles. Philip isn’t a great fan of this diet (it’s not the tastiest due to the restrictions) but eats as much as his owner can get him to!

Philip did well over the next year, and at the following vaccination and health check appointment he was maintaining his weight and his blood results were stable. At this year’s vaccination check, two years on, he had actually gained weight. Philip was doing well but his owners noted that he was struggling to jump up to his favourite place high up in the kitchen. He had lost a fair amount of muscle mass from over his hindquarters and was diagnosed with osteoarthritis, another condition common amongst elderly cats. Philip was prescribed anti-inflammatory pain-killers at a reduced dose so that they wouldn’t harm his kidneys, and his owners provided it on his food daily, with good results.

This month however, poor Philip started to walk strangely – all four of his paws became flat to the ground, like lion’s paws – or even clown feet! He seemed comfortable but his appearance did look rather odd. This phenomenon is known as a ‘plantigrade stance’ and is usually caused by either a low level of potassium, or secondary to underlying diabetes mellitus – high blood sugar. A repeat blood sample and then urine sample were taken which confirmed the latter – Philip was now diabetic as well! The diabetes caused a neuropathy (nerve condition) which resulted in his paw appearance – and occurs in only approximately 8% of diabetic cats.

Philip’s owners started treatment straight away, which consisted of twice daily insulin injections. There’s a fair chance that this will make his clown feet go away – but even if not, he should be stable and has the best chance of living long into his twilight years with his several conditions under control.