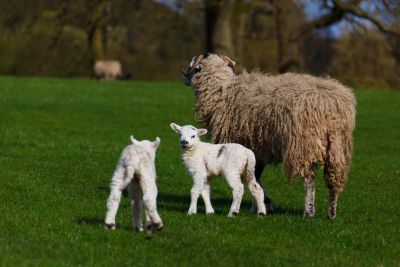 Getting Ready for Lambing

We had an amazing summer, lovely and sunny and very dry. Now that the nights have drawn in and it’s  colder, those sunny days seem like a distant memory.

It’s easy to forget about summer now that we’re starting to get busy with our winter jobs. Sheep work is very seasonal. For our sheep farmers to get the most out of their animals, it’s best to think ahead and get organised. It may seem like a long way away. But our sheep farmers are already getting ready for lambing time.

I’ve been busy helping them with some tasks to help ensure that lambing goes as smoothly as possible. I thought I could let you know about some of these and why we do them in this article.

I have been having several conversations with sheep farmers about vaccination protocols. There are some vaccines that we want to give our breeding animals before they are mated. The commonly used vaccines before mating are used to protect the ewes from abortion. They protect against Enzonotic abortion caused by the bacteria chlamydia and Toxoplasmosis caused by the protozoan parasite Toxoplasma.

There is one other very commonly used vaccine; this one however, is given during pregnancy, called Heptavac P Plus. It is used to protect against several clostridial disease and pasturella pneumonia. We administer this vaccine at a specific point during gestation, 4-6 weeks prior to lambing. This is to stimulate a good immune response in the ewe. As a result of being vaccinated the ewe will have increased antibody protection against several clostridial diseases and pasturella. She is then able to pass these antibodies to her lambs in her colostrum; the first milk that she produces. By ensuring lambs get a good feed of their mother’s colostrum, we can help protect them against several clostridial diseases and pastueralla for the first few weeks of life, until they are old enough to get vaccinated them selves.

Vaccines are important at protecting against disease. Another area we can work on in reducing disease is making sure the lambing period is kept as short as possible. It means that the farmer doesn’t have to be kept busy lambing for so long. There is a smaller range in ages of lambs and subsequently sizes. If lambing is inside, a nice short lambing period means that there isn’t as long for bacteria to build up inside the sheds. How do we manipulate the breeding cycle of sheep? There are several different techniques, each one chosen to suit the farm. Some of our sheep farmer use medicines to induce their ewes to cycle all at the same time. This might be more suitable for smaller numbers of pedigree ewes, or ewes that are going to be mated artificially via laparoscopic insemination.

We can also manipulate the oestrus cycle of our ewes via a natural phenomenon called the Ram effect, we utilise this using Teaser Rams. A teaser ram is a young fit health uncastrated animal that we perform vasectomy surgery on. During this procedure we remove a piece of the male vas deferens, so as to prevent sperm from entering into the urethra and thereby prevent fertilization. Teaser Rams still produce the same pheromones as entire Rams. It is these pheromones that induce ovulation in ewes. Making the ewes naturally synchronise before a fertile ram is introduced.

When a farmer puts a fertile ram with his ewes, they often put on a raddle or paint the ram’s brisket. This is so we can keep an eye of what ewes the rams are mating. You may have seen fields of sheep with different coloured bottoms. This indicated to the farmer that the ram is working. When we know what date the rams started serving the ewes when can work out when the lambs are due to be born. The average gestation length of a sheep is 147 days.

Another task that we can perform during gestation is scanning the pregnant ewes. We do this using an ultrasound scanner, putting the scanner probe against the sheep’s belly. Very similar to human pregnancy scans, although a lot quicker… professional sheep scanners can scan more than 100 ewes an hour!

For some of our early lambing flocks we have already scanned them. Scanning is a useful tool to ensure we are correctly managing the nutrition of our pregnant ewes. Ewes that are scanned as having multiple lambs can be fed an increased ration, in comparison to ewes carrying a single lamb. This means that each ewe will receive the appropriate nutrition to make sure she doesn’t become to fat or alternatively too skinny.

Although it seems like it is far away, farmers are already doing lots of preparation in anticipation for a successful lambing. It won’t be long before the sheds will all be getting ready for the ewes to get comfy, before their lambs are born and we will be able to enjoy seeing spring lambs bouncing around in the fields.