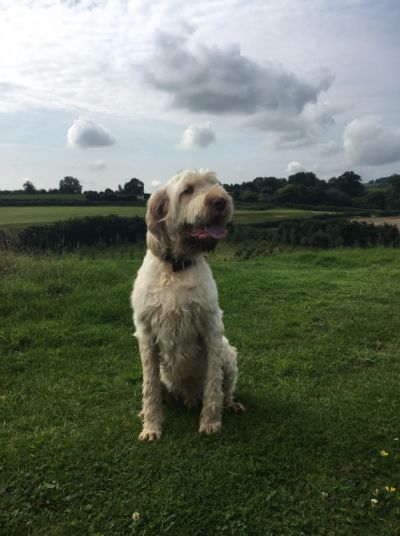 Emergency surgeries are commonly performed both at our Shepton practice and Wells branch, and are some of the most satisfying treatments we do when the animal operated on recovers and is able to go home, especially following a caesarean when they have puppies or kittens in tow! Equally however,  they can also be some of the most disappointing, where despite everyone's best efforts and hard work an animal may end up passing away. Luckily more often than not such surgeries are a success.

Dougie was an Italian Spinone aged just over 5 and a half years old, weighing in at an impressive 44.7kg when he came in off colour and off food. He had vomited once the night before and was not getting any better. On examination by my colleague Greg, it was found that Dougie was tender within his abdomen and an unusual mass like structure could be felt. In larger breed dogs this always raises the suspicion of the involvement of the spleen, and tumours of the spleen are not uncommon in dogs of this size. We opted to x-ray and ultrasound scan to try and work out what this unusual structure was. The x-rays confirmed a large mass like structure appearing to look like the spleen, and this was confirmed on the scan. The scan however showed the spleen to have normal internal architecture, whereas with splenic tumours often spleens look very distorted. So whilst the spleen appeared enlarged and in an unusual position, a splenic tumour then did not quite fit.

A presumptive diagnosis was made of a splenic torsion - this is where the spleen twists around on itself and disrupts its own blood flow, causing it to enlarge with a real danger of rupture and fatal bleeding. There are 2 treatment options - try to de-rotate the spleen, or remove it. The spleen was manipulated while Dougie was still under sedation and a repeat x-ray was taken later on in the day as if successful the spleen should go back to a normal size. The repeat xray showed that although smaller the spleen was still markedly enlarged, and Dougie's heart had started beating irregularly, likely due to toxins being released from damaged splenic tissue. At this point the owners were consulted and surgery was initiated.

The operation performed is called a splenectomy. Upon entering the abdomen there was a large volume of free blood present which had to be removed. All the vessels leading to the spleen used to have to be tied off individually, a very time consuming process! Now however the use of a diathermy machine, which cauterises the vessels using heat and subsequently cuts through them, makes the operation much quicker, which is always a good thing. The spleen is suspended from the lining of the abdomen by connective tissue called mesentery. After removal of the spleen the mesentery was examined, which was full of blood clots, and so a portion was removed. The spleen and mesentery were subsequently sent for microscopic analysis  to ensure there was no underlying tumour present and the results were... All abnormal tissue seen was a combination of blood clotting and bleeding and no underlying tumour was found.

This was great news for Dougie, his owners and us, as Dougie was able to go home a couple of days later and made a full recovery. Such live saving and successful surgeries make us remember why we went into this profession, and make all the hard work worthwhile.