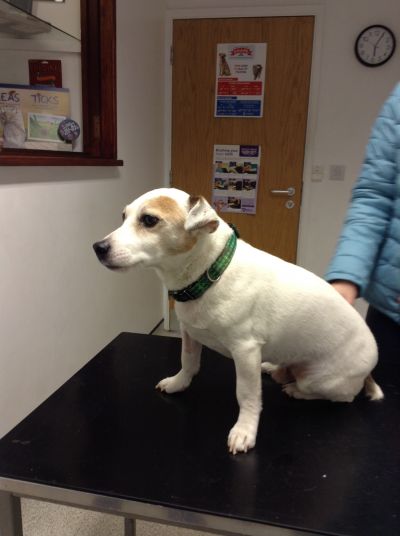 Neutering, or castration for male dogs specifically, is a routine operation carried out regularly at veterinary practices. Castration is usually performed preventatively, to reduce or eliminate the risk of developing testosterone driven diseases, as well as for behavioural reasons and preventing unwanted pregnancies. However this surgery is also a treatment option, designed to cure conditions such as testicular tumours, as was the case with 12 year old Jack Russell, AJ.

AJ had avoided visits to the vets for most of his life, but as he was getting older his owner brought him to the vets for an ‘MOT’-style check-up. He was generally in good health but his owner noticed he was looking a bit differently ‘down below’. One of his testicles had grown larger over the last few months. AJ’s examination revealed his right testicle to be significantly enlarged, and firm but non-painful to the touch. Additionally, his left testicle had become shrunken and flabby. These findings suggested testicular cancer. AJ was otherwise well and was overdue his vaccinations, so was able to restart his course the same day, before booking in for the hopefully curative surgery of castration.

The next week, the day of AJ’s operation came around. AJ returned to the practice, although not quite as happily as the first time because he had left the house without his breakfast, so that he was starved in preparation for surgery. Especially because he was classed as a senior patient, prior to his general anaesthetic a basic blood panel was taken to assess his underlying organ function and an intravenous fluid drip was started. Fortunately the blood screen had demonstrated that his kidneys and liver were performing well, so he was fit enough to undergo the anaesthetic and surgery.

Despite the fact that his testicles were different sizes, AJ’s castration proceeded without incident and in the usual way apart from that the surrounding skin and scrotum were also removed in a procedure known as a ‘scrotal ablation’. This was to ensure that all cancerous tissue was removed. Both testicles were then placed into a pot of formalin which would then travel to the lab for analysis by a pathologist. AJ’s owners would wait with fingers crossed for 5 days until the results were received.

AJ awoke from his anaesthetic with a wound a couple of inches long complete with absorbable, dissolvable stitches. AJ would have to wear a bodysuit to prevent him interfering with these stitches, but it was more comfortable than a buster collar cone, and he did look rather fetching! There was a bit more tension on this wound than after the average castration surgery due to more skin being taken than normal. This meant that AJ’s exercise had to be particularly restricted, for at least ten days to ensure the wound would heal rather than re-open. Instead of playing with his favourite ball, AJ’s owners would instead be carrying him everywhere, something that the cheeky Jack Russell became quite accustomed to – in fact he was quite a sight arriving in a bodysuit upside down in his owner’s arms for his post operative checks!

To everyone’s relief it was good news from the lab. The pathologist had indeed confirmed a cancer, but a benign one, called an interstitial cell tumour. This is the best possible option of three types of testicular tumours that dogs can suffer from. As suspected, the other testicle was tumour free but had become ‘atrophied’ – meaning that it had lost all function, as is usually the case with testicular cancers. AJ’s castration operation was therefore expected to be his cure, and he could go back to playing with his favourite ball knowing that the treatment had been a success!