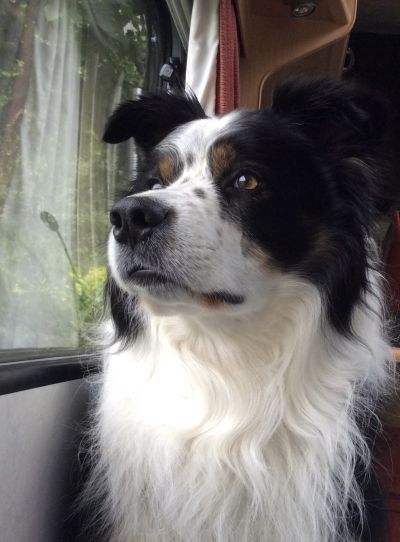 Teg has a mass on his spleen

When Teg came in to see us at the end of November, it seemed that he was just suffering from a nasty upset tummy. He wasn’t quite himself but there was nothing to make us worry too much about him. He was treated with some paste containing gut-friendly bacteria to try and settle the problem down, but was no better the next day and had started to pass a little blood.

Teg is always very well behaved at the surgery so we can examine him easily, and while having a really good feel of his tummy, we noticed that his spleen felt a little more obvious than usual. We can’t always feel the spleen in a dog’s abdomen, particularly if they are a stocky breed or a little stout, but as Teg is a slim lad it was easy to feel. This wasn’t an immediate worry, but was something to be aware of and talk to his owner about as it could be a sign of a problem. He was given some more medication to try and clear up his diarrhoea and we arranged to see him a week later to check him over.

By the next week, his owner reported that he was completely back to normal. Excellent news. There was no change when we felt his tummy, though, so he was booked for an ultrasound scan. Ultrasound is a very good way to look at the abdominal organs as it is like looking at a cross section through the tissues, rather than X-ray which just shows us the outlines. With a placid patient like Teg, there may be no need for sedation and it is not painful. The ultrasound confirmed that the spleen was the problem. It mostly looked quite normal, but we could see a tennis-ball sized mass adhering to 1 edge which looked quite abnormal. This was a worrying find, and at this stage it wasn’t clear whether the mass was benign or a cancerous growth.

After discussion, it was decided to take Teg to surgery to remove his spleen. Although it is an important organ, being involved in the immune system and red blood cell production, storage and destruction, a dog can live perfectly healthily without it as all those functions can be performed elsewhere in the body.

The surgery to remove his spleen went well; the mass looked just as we expected from the scan, but it was on the point of rupturing when we took it out which would have caused a severe and possibly life threatening bleed into the abdomen. It is quite an intricate surgery as the spleen has a complicated blood supply and all the vessels have to be carefully closed to ensure there is no bleeding. He made a good recovery from the surgery and was able to go home the same evening.

There then followed a few very anxious days while we were waiting for the report from the Pathology laboratory which would tell us what sort of mass it was. I’m happy to tell you that when the report came through it confirmed that the mass was completely benign and that Teg should have no ongoing problems. We were lucky to pick it up while examining him for something quite different as the consequences of rupture could have been very serious. He’s now had his stitches out, is back to full activity and is looking his handsome best, as I’m sure you will agree.