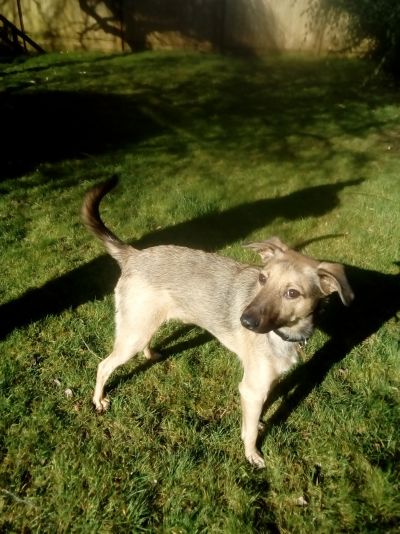 Logan has had an eventful life – he was rescued from Crete at about 4 months old and landed on his paws with a loving home. We first met him when he was approximately 5 months old and he was very healthy then. His first few months in the UK were uneventful but then he quite quickly became unwell.

Initially it looked like he had gastritis (stomach inflammation from various causes such as infection or ‘dietary indiscretion’) with vomiting, depression and shaking. But on examination we discovered that his heart rate was only 40 beats per minute - normally a dog of his size and age would be around 80-90. We were suspicious that there was something more serious underlying his current symptoms.

We were primarily concerned that he might be suffering from Addison’s disease although it is unusual in a dog as young as Logan. This is an uncommon condition, thought to be immune mediated, which can present with very vague signs including gastroenteritis, lack of appetite and increased drinking/urinating. One clinical finding can be bradycardia which means a slow heart rate.

Addison’s disease can be fatal if left untreated but, once diagnosed can be well controlled with medication. It is caused by failure of the adrenal glands to produce two hormones – aldosterone which controls electrolyte levels and cortisol which, amongst other things, controls gut and brain function.

Lack of aldosterone causes blood sodium and chloride to drop and potassium to rise which leads to dehydration and the kidneys stop functioning normally. Lack of cortisol causes vomiting, diarrhoea and inappetence as well as depression and lethargy.

In view of our concerns we took a blood sample from Logan and checked his electrolyte levels and this confirmed that his sodium was very low and his potassium was very high and this was suggestive of Addison’s disease. We took further blood following injection of a drug to try to stimulate the adrenal glands to produce cortisol and sent this to an external lab to compare this to the first blood sample taken. Results confirmed sub normal levels present in both samples confirming Addison’s disease.

Logan was immediately placed on intravenous fluids to replenish his sodium and chloride levels, to dilute his potassium level and to rehydrate him, and injectable steroid to replace his missing cortisol. He responded quickly and was started on monthly injections to replace his aldosterone and daily tablets to replace his cortisol.

Stabilising affected dogs can take a while and repeat blood tests are required until the sodium, chloride and potassium levels remain within the normal range throughout the month between injections and the dog is bright with a good appetite. Medication is required lifelong.

Logan is a lovely patient – he is still pleased to see us every time we see him despite all the blood tests and injections he has had. He has grown in to a handsome dog and, hopefully, has many healthy and happy years in front of him.