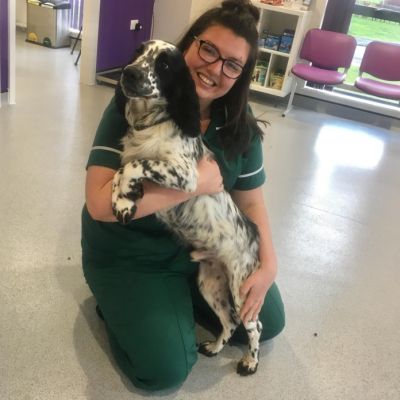 With the new Wells Surgery in full flow, it has been wonderful to see both new and existing clients setting foot into the practice with their pets.  Our Nurse Clinics provide a service for patients, from clipping nails, to vaccinations but also for our clients as we can listen and advise them on their pet’s health and wellbeing.  My favourite Nurse Clinics are Puppy and Kitten chats. These pets have their first consultation between eight to nine weeks of age which includes a health check with one of the Veterinary Surgeons before starting their vaccinations. It can be very daunting for client when first getting their young pet, for example settling pup into a new environment, training and the correct socialisation, so the nurse clinics are here to help them. We offer monthly weigh and worm clinics to come in for a casual consultation and talk through dietary, behaviour, parasite control and teething to neutering.

I would like to take you on a journey with one of my regular patients, Henry the Sprocker who I met at just 8 weeks old for a Puppy chat as he was due for his first vaccination. Henry is now 10 months old and has reached adult hood and has been seen monthly for weigh and worm clinics with myself to check up on his growth, behaviour and overall health. Henry was weighed at 4.62kg and a health check was performed by a Veterinary Surgeon which includes a thorough nose to tail check and listening to his heart and chest.  He was a fine example of a healthy and happy pup! 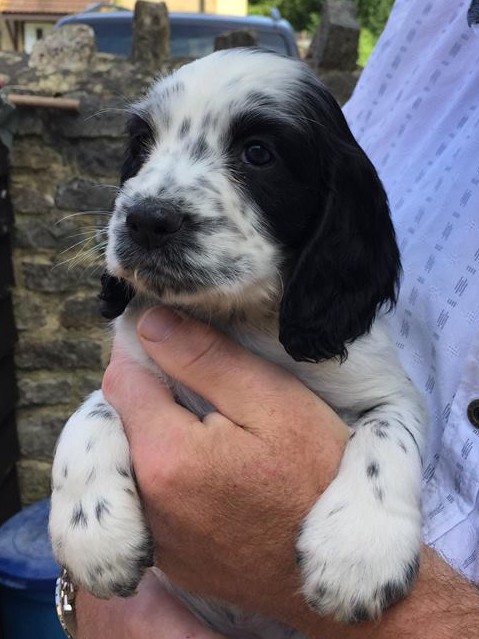 Within that first month and with Henry settling into his new environment, it  was a really important time for Henry to spend time getting to know his owner and home whilst waiting to be fully vaccinated .By 3 months of age Henry would be able to start socialising with other dogs on small walks to the park. Socialisation is a really important factor during your puppy’s first few months - for example, touching pup’s head, around eyes, ears and mouth area and paws. Henry’s first 3 visits to the Vets would mean him having his course of vaccines and the last thing we would want is for Henry to feel scared or to associate us with needles every time he came in. This is where the monthly weigh and worms play a huge part of your pup’s wellbeing and socialisation.

At 4 months of age, Henry weighed 8.1kg and was beginning to start chewing anything that he could get his little needle teeth into. Within our weigh and worm clinic I would include a check on Henry’s teeth and also repeat a dental examination at 5 months of age (as most of Henry’s adult teeth would be through by then). We would also start to chat about neutering Henry as he was starting to show ‘excitable behaviour’ with some of his favourite teddies which isn’t uncommon for pups of this age to perform this kind of behaviour.  A testicular examination also took place within the consultation to check that both testicles had descended and felt normal in size and shape. I would then re-check at Henry’s 5 month check and Henry could then be booked in to be neutered the following month.  Neutering sooner rather than later can reduce the chances of prostate and behavioural issues, e.g. boisterous and territorial behaviour; it also reduces the risk of your dog wandering off when a bitch is in season or running off when on walks to chat up the ladies (which may not want to be chatted to).  However if your pup is of a larger breed, we would encourage you to wait nearer to 1 year of age. Also if your pup is nervous and needs more confidence we would also encourage you to wait a little longer before neutering.  Henry was neutered at 8 months old and is now at a strapping 10months old, weighs 16kg and is well into adult hood; he is a fine example of a strong, healthy and confident boy! I strongly believe that without the socialisation and monthly weigh and worm visits to the practice, Henry would not be as social and placid as he is now. Henry has also had some trips to the vets for a few other occasions, e.g. a poorly tummy, lameness and a small cut to one of his limbs (fairly common with excitable and inquisitive pups!) and without getting to know the practice and the team through socialising at the regular clinics he may not have tolerated the treatments as bravely has he has done.  It has been so rewarding getting to know Henry through his puppyhood and knowing he is always happy and excited to see us when his, ‘not so little paws patter’ into the practice.   I am very much looking forward to meeting and welcoming many more puppies and clients into both our Shepton and Wells Practices.