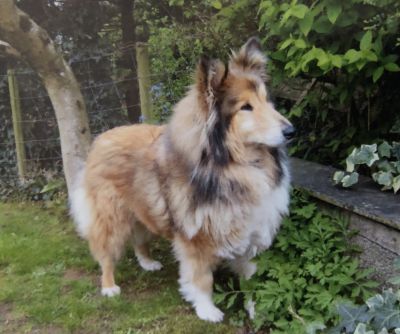 One thing I’ve learnt doing this job is that the problem isn’t always immediately on the first examination. Sometimes symptoms can be subtle and not always evident when we, as vets, get to examine a patient. However, owners know their beloved pets and if they tell us something isn’t right, then we ignore this at our peril. This was certainly the case for Penny the 7 year old Rough collie – her owners knew she just wasn’t quite herself and with time all became clear.

Penny’s owners had started to note that she had a bit of an odd cough, nothing more, and in herself she seemed fine. This went on for a few days, even a week, and then her owners felt it would be best to get her checked over.

On her visit to the vet Penny appeared very well and after a full examination nothing obvious could be found. Not wanting to prescribe unnecessary medication we decided we should wait and see if her symptoms resolved. However when, after a week, the cough was still ongoing,  we elected to trial some medication to soothe her symptoms.

The medication had little effect.  In fact her owners only saw that Penny now started to drool excessively. As such we decided on a plan to anaesthetise Penny and take some x-rays. While she was asleep we found the lymph nodes under her neck were slightly enlarged and so samples were taken. The good news after all of this was that the results were all very normal. The bad news was that we still couldn’t find an obvious cause of her niggly problem!

Over the next few weeks Penny’s drooling started to become more prevalent. Penny was re-examined and this time there was a change. It wasn’t easy to see as her impressive long coat covered it up, but when we felt her neck this time we could feel that one of her salivary glands was enlarged, and a bit irregular.

A swelling in this area can often indicate a salivary mucocoele - where damage to the salivary gland can cause saliva to leak under the skin and form a pocket of mucus. However, as the swelling felt a little irregular, samples were taken to send to the lab to check if all appeared normal.

The results came back with a note of caution. Yes there was mucus, but also hidden within the sample were some abnormal cells that could indicate a tumour. This was an obvious concern. Our immediate thoughts were that surgery would be required but with a lot of very vital structures in the neck that could get damaged during surgery we wanted more detail on what was going on, in order to plan this property. To do this we felt it would be best for Penny to have a CT scan of her head and chest in order for us to visualise the structures involved and plan our surgery. Penny was sent to a specialist referral veterinary hospital for an out-patient CT scan.

Penny’s scan was a great help. Her chest was clear, indicating that, if there was a tumour, then there had been no obvious spread. In her neck there was a fluid-filled cavity pushing on her voice box, the likely cause of her cough, and it was surrounded by a thickened capsule which was the irregular swelling we could feel. With all this detailed information we could now plan to surgically remove this abnormal tissue and submit it to find out exactly what it was.

The big day arrived and Penny underwent her surgery. An incision was made to the side of her neck and the area was explored in order to carefully dissect around and remove the structure identified on the scan. At the end of the surgery we had successfully excised her damaged salivary gland along with the irregular capsule surrounding the mucus cavity. Penny’s neck was sutured and a drain placed under her skin so no fluid could collect.

Penny healed very well as we waited in anticipation of her biopsy results. The CT scan had allowed us to visualise the area but only the biopsy results would be able to tell us exactly what the swelling had been. After a week of waiting we finally had our answers. The salivary gland was inflamed but normal. However, in the capsule there were signs of a tumour of cartilage cells. The good news was that it was a low grade tumour and it appeared that we had removed it all. Penny would need to be monitored but the prognosis looked good.

Six months on I can report that Penny is indeed doing well. Her cough and drooling are all a forgotten memory and she’s back to just enjoying life. It’s a great relief after being such a challenging case. Thankfully for Penny her owners vigilance meant that her unusual signs were not dismissed and they did everything possible to ensure a successful outcome for her.