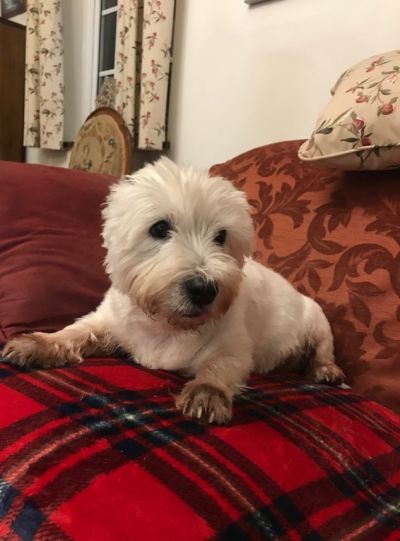 Treating one condition unmasks another

My article this week is from a slightly more personal point of view, as the dog that presented to me was one of my Nan’s 2 West Highland White Terriers – Ruby and Pearl.

It is well known that WHWT’s are prone to developing skin allergies however luckily neither Ruby nor Pearl had seemed to suffer much from this throughout their lives; they were sisters and now 10years old. Ruby however had developed an increased level of drinking and eating and had begun to wake her owner up in the middle of the night demanding food. She had been struggling a bit more on her walks and getting more out of breath, and had developed a little bit of a ‘pot belly’.

Any changes in appetite and drinking without any obvious changes in routine, food, exercise etc…should prompt a look into possible causes as often these are linked to underlying conditions and not just ‘old age’. A number of conditions may cause both an increased appetite and drinking, including diabetes, an overactive thyroid (rare in dogs but very common in cats), hormonal imbalances, poor digestion and more.

The first test to do was a simple blood test as a screening for some of the above conditions; this was easier said than done as Ruby can be quite grumpy! Eventually, after getting a blood sample, the results of the bloods along with the symptoms Ruby was showing pointed us towards a condition called Cushings. Cushings is caused by the body overproducing a natural steroid hormone called Cortisol (the so-called ‘stress hormone’) and it is this that causes the clinical signs seen in Ruby. Cushings is often not so easily diagnosed and can be displayed far more subtly than with Ruby.

Normally before we begin starting treatment we like to confirm the diagnosis of Cushings with a second test where we have the animal in the practice for a couple of hours and take multiple blood samples – unfortunately due to Ruby’s temperament we decided against this and very carefully began trial treatment to assess response. Trial treatment in the majority of cases is not recommended and confirmatory blood samples are advised. Despite this Ruby began to respond well to treatment with the owner noting a reduction in appetite and drinking and no more late night calls for food. After a bit of to-ing and fro-ing with the treatment dose she has stabilised well.

The long term effects of not treating Cushings are not well understood, but it is treated more often for the quality of life aspect than any other.  During treatment Ruby developed another issue – she developed the more classical Westie skin allergy and became very itchy. This is because as mentioned above dogs with Cushings have an increased level of the internal steroid Cortisol, and steroids are very good at suppressing itchy skin. The medication used to treat Cushings causes a reduction in this internal steroid hormone and so any allergic condition which was previously being supressed by increased Cortisol comes to the fore. Ruby therefore had to be started on medication for her now apparent skin disease, which consisted of another set of tablets known as Apoquel. So whilst initially she became well controlled on medications for Cushings, this in turn unmasked a more typical condition of skin allergy which she now also has medications for.

All in all she is doing well, her appetite and drinking are more normal, her energy levels have increased and her fur is beginning to regrow from treating the unmasked skin allergy.