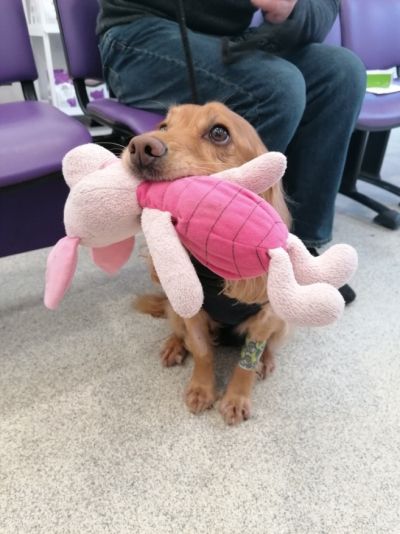 In early March, Jess a 6 year old cocker spaniel, presented to Izzy with a 24 hour history of vomiting, lethargy and some weight loss over the past couple of weeks.

On examination her heart rate was raised but there was no really obvious discomfort in her abdomen or anywhere else.  Her owners felt it was unlikely she would scavenge or ingest a foreign object but couldn’t rule it out completely… as she does like to chew her towel on occasion!  Bloods were taken and she was sent home with supportive medications to see if she felt better and to reassess in the morning.  Unfortunately the situation didn’t improve by the next day and she seemed more uncomfortable with a potential abnormality in her abdomen.   Jess was admitted for fluid therapy to replace the fluid she had lost from vomiting, alongside pain relief.  X-rays revealed some gas filled loops of intestine and a distended stomach alongside an opacity that could have likely represented the abnormal mass felt on abdominal palpation!

The decision was made to carry out an exploratory laparotomy, as a foreign body was the most likely cause of the signs we were seeing and from the investigations we had carried out.  When in theatre, it became clearer that this was not a simple foreign object obstruction in the intestines that could be removed through one incision, but a linear foreign body.  A linear foreign body extends length ways along the intestines usually with an anchor point - often within the stomach.  This causes the intestines to bunch up and cause severe problems to the gut wall and its blood supply.  Because it is too dangerous to make one incision and pull the length of the foreign body out, three incisions were needed to remove the contents of the long foreign body at different locations.  The problem with making three intestinal incisions rather than just one is that there is increased risk of intestinal wound breakdown.  The culprit in Jess’s case was her towel that she sneakily sometimes chewed!

Jess was hospitalised for four nights after surgery, as she required intensive nursing whilst we waited for her to recover. This was generally a slow but steady process after such an invasive operation, as she needed strong pain killers, alongside gastro-protectants, antibiotics and fluid therapy.  The main concern was trying to get her to eat voluntarily to keep her guts moving and boost her energy levels. Getting her to eat took a lot of nurse encouragement and involved syringe feeding initially but over time she started eating again! I am sure the regular loving visits from her owners, alongside company from Piglet - her favourite toy, aided her recovery. It was a big relief and happy day when we discharged her with a wagging tail and Piglet being carried out in her mouth!