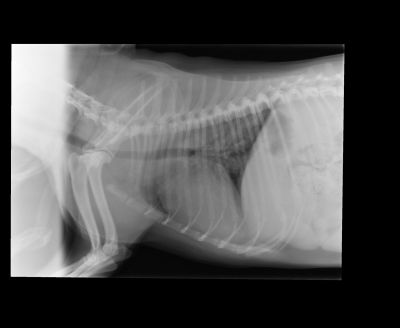 In the current climate, I feel that we are all somewhat hyperaware of coughing, but fear not, this isn’t an article about Coronavirus! Today we are discussing the case of Alfie, a 12 year old Lakeland cross Jack Russell Terrier, who had been violently coughing. Alfie’s owners booked a telephone consultation to avoid unnecessary travel to the practice and to reduce human contact. This gave me plenty of time to ask Alfie’s owners lots of questions to characterise the condition and end up with a refined, tailored list of possible reasons why he might be coughing. I could also hear Alfie coughing in the background!

Alfie’s cough was dry and usually non-productive (he hadn’t been seen to cough anything up) but sometimes he would retch at the end of a coughing fit (known as a ‘terminal retch’). He was generally much worse when he was indoors compared to outdoors and worse at rest and overnight compared to when he was active and exercising. The cough had been present for over two weeks and was static in its progression; it wasn’t getting any better nor any worse. Coughing aside, his owners considered him to be very much like his normal self; he had a good appetite, was drinking, urinating and passing normal faeces, he enjoyed his walks and didn’t appear to be showing any other signs of illness. We talked about any changes in his environment at home, such as the use of different laundry detergents, any aerosols used in the house and whether anyone at home was a smoker. This was to attempt to discover any possible aerosolised allergens that might be causing him bother particularly because he was worse when inside, but this was not the case either.

With the model described above for categorising and the detailed history from the owners we made a list of possible reasons why Alfie was coughing so frequently;

With this list we had reached the limitations of a remote consultation so it was arranged that Alfie would make a visit to the practice for the day, without his owners, for examination and to perform some imaging to take a look at this chest.  Listening to his chest with our stethoscopes, we could hear abnormal ‘crackle’ sounds, this is a sound made when air moves through fluid or mucus. His heart sounds were regular, rhythmic and normal making heart disease less likely. He was otherwise well so we gave Alfie a sedative injection to relax him to allow us to take some x-rays of his chest. The x-rays proved to be very useful as they showed a clear ‘bronchial pattern’, little doughnut shapes (circled in photo) throughout his lung field which indicate thickened areas, something we see with canine chronic bronchitis, an inflammatory condition of the lungs. A diagnosis of chronic bronchitis also fit well with the majority of signs described by Alfie’s owners and so treatment for this has commenced. For Alfie this treatment will be lifelong in order to manage the inflammation and the consequent mucus build up in his lungs, but as long as he takes his medication, the prognosis long term is good. We will need to keep checking Alfie routinely to make sure the dose of medication is appropriate and that he isn’t experiencing any debilitating side effects but so far so good!