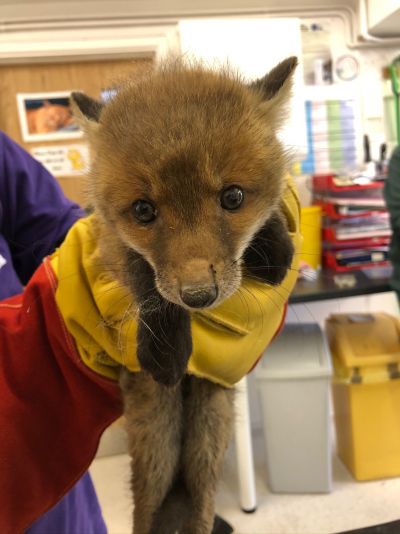 Looking after your pets during lockdown

Vets are here for your pets when they’re ill, but what about our wildlife? The RSPCA are available to attend and provide help, though they can be in high demand. There are several wildlife rescue centres that have dedicated vets or nurses connected to them, dotted around the south west that can be within an hours’ drive too. However in the event of a true emergency, first opinion vets practices can be a useful stepping stone to provide urgent care, especially during the busy periods of spring and early summer.

Two mammals that seem to be presented to the practice regularly are hedgehogs and rabbits – particularly baby ones of the latter. We are lucky in Somerset to have two fantastic rescue centres – Secret World near Burnham on Sea, and Prickles Hedgehog Rescue in Cheddar that are incredibly helpful and staffed with very knowledgeable volunteers. Over this season the practice has successfully handed over care of these species to both of these centres. Fortunately volunteer drivers are on hand, though very busy, to help transport the creatures if members of the public are unable to. These centres are designed for rehabilitation essentially, so it is important for members of the public to be aware that they are possible destinations for animals in need, and they can provide crucial information over the phone at the point an animal is found, though sometimes it is suggested that they are taken to the nearest vet practice en route if any injuries are noted. Emergency medication for wounds, warmth, feed and rehydration fluids can be provided before their rehab.

Fledglings are seen all too commonly at this time of year too, often when they don’t need to be brought into the vets. Fledglings are young birds that have recently left the nest and are learning to fly, so it is not uncommon to find them on the floor having a rest and working out their next move. Their parents will often be near by, so the worst thing that can sometimes be done is to take them out of a familiar environment and away from their family, stressing them and coating them in unfamiliar smells to parents that still intend on feeding their offspring. If worried about predators, it is best to keep cats inside for a few hours, provide cover, or carefully move the bird to a more protected place. As such, baby birds only need the vet if they are obviously injured or if they are in fact a nestling and have very little feather – these birds will need transferring to someone able to hand rear.

There is a diverse population of bird life in Somerset and several different species have been presented to the practice for care. Two birds in particular that have needed veterinary attention this year include a jackdaw and woodpecker. Both birds were young and it is these inexperienced birds that often get injured, due to unsteady flight and being uncertain of their surroundings when it comes to predators.

In the jackdaw’s case, he was found in a garden with a dropped wing and an inability to fly. A dropped wing could sometimes be a sign of minor soft tissue trauma that rest and possibly an anti-inflammatory injection can heal, however an examination from a vet is important as this revealed swelling near to the shoulder and an increased range of movement that suggested a possible fracture. After a quick anaesthetic, an X-ray unfortunately confirmed our worst thoughts. Due to the type and location of this fracture, euthanasia was recommended for the bird. The jackdaw was unlikely to be able to fly again, and topped with this species’ tendency to imprint on people, if a wild bird can’t be released or meet its needs in the wild then euthanasia is the kindest option.

The woodpecker was a juvenile greater spotted variety, and had been caught by a cat. Cat attack injuries need to be treated with antibiotics, but this bird was in shock too. Wild birds don’t cope well with human interaction, especially if they have experienced a prior stress, and woodpeckers are prone to captivity stress more than most. Unfortunately this bird’s health declined rapidly and again euthanasia was the kindest option at this stage to prevent further suffering. Although these cases may be seen as bad news, if the birds hadn’t been found and brought into the practice, they would have continued to suffer.

It doesn’t have to always be an unsuccessful outcome with wildlife though as a poorly fox cub presented to the practice ended up doing very well. Found trapped in an industrial centre overnight, the cub was cold, dehydrated and tired. With careful handling and keeping things as calm as possible, no injuries were observed but a very low temperature was noted. The cub was slowly warmed up in a dark and quiet kennel, and saline fluids were injected under the skin in order to rehydrate. Volunteer driver collection was arranged and once safely at the rehab centre, the cub went from strength to strength, ready for release back into the wild – a real happy ending!