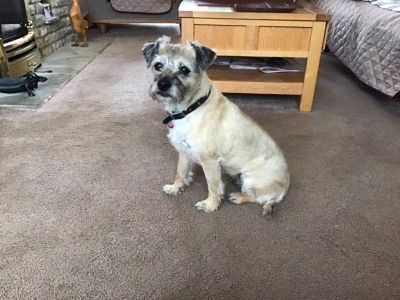 When Bea was collected from a rescue centre eight years ago, she really fell on her feet. Her gentle, sweet nature made her the perfect companion for her new owners who have given her a fantastic, loving home.

We see her quite regularly to monitor an ongoing condition, but she came in twice last year with episodes of vomiting, and being miserable and off her food – most unlike her. On the first occasion, a blood test showed some irritation to the liver, and when that pattern of blood changes was seen again in December when she suffered another similar bout, vet Sarah thought that we should do some more tests.

Bea came in and was sedated so that she was relaxed enough to have an ultrasound scan of her abdomen. This showed us that her gallbladder was abnormal. Instead of having a plain, dark appearance on the scan, it looked like a cut kiwifruit. Strange as it may sound, this is classically characteristic of what is called a ‘gall bladder mucucoele.’

This is an unusual condition, but one that has become more common in recent years. We don’t fully know what causes it, but it’s thought that breeding plays a part. It is most common in some smaller breeds of dog, but particularly so in Border Terriers like Bea. The gall bladder becomes full of a sludgy, mucoid material, and its lining becomes thickened and abnormal. Over time, the wall of the gall bladder becomes damaged and bile can start to leak out. When this happens, it becomes very serious as peritonitis can result. The only curative treatment is surgery to remove the gall bladder, which, although a routine procedure in people is much more difficult in a dog, and this condition poses particular risks associated with anaesthesia and surgery.

We were weighing up the risks and benefits to Bea, when she started to deteriorate and it was clear that surgery was essential. In quite a long procedure, vet Martin, with Sarah assisting painstakingly dissected the swollen, hard gallbladder away from the liver and removed it, while the nurses carefully monitored her under the anaesthetic.

After surgery, Bea was fitted with a feeding tube to aid her recovery, and was hospitalised for feeding and observation for four days until she was well enough to go home, seeing in the New Year in hospital in the process!

Although glad to be home with her owners, she was a bit up and down for the first week, with a variable appetite and some nausea. We were concerned about her, but she did seem to be moving slowly in the right direction. The turning point came when I saw her two weeks post surgery. Her owner was delighted to report that she was like a different dog, brighter and happier than she had been for months.

I’m glad to say that she hasn’t really looked back since!