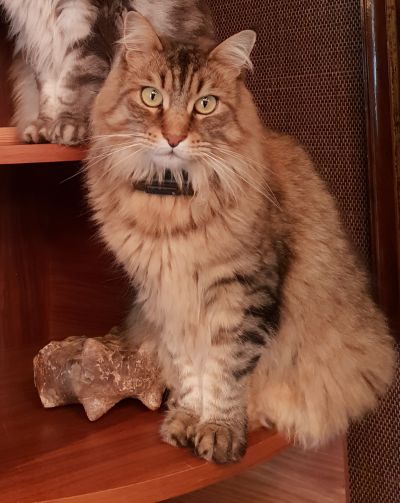 Cats love to groom. They don’t just enjoy it though, they need to, in order to keep their hair from matting and their coat in good shape. For this reason long haired cats especially can be prone to hairballs. Often owners will find an unpleasant wet ball of hair delivered onto the doormat in the morning, but in Aslan’s case an extra large hairball caused excessive vomiting leading to emergency surgery.

Aslan is a six year old Maine Coon cat. Originating from the US state of the same name, this type of cat is highly sociable with an almost ‘dog-like’ persona, and Aslan is no different. Maine Coons are a very impressive breed, and are actually the largest pedigree cats, with the ‘gentle giants’ sometimes weighing in around 8kg! As well as their big paws and striking ears, they are famed for their luxurious long coat – and Aslan and his brother Tumnus both sport fantastic flowing locks!

However one Friday evening Aslan was very quiet and not his normal, sociable self. He had been intermittently vomiting for a couple of days earlier in the week, and once he was brought to the vets by his owner, he was found to be depressed and dehydrated. Aslan was admitted to the practice to be hospitalised on an intravenous fluid drip, and a blood sample was taken, whilst anti-sickness medication was given.

By the time his blood results were received, Aslan was a little brighter, but still not himself, and the results were not particularly clear on his condition, but highlighted his previous dehydration. Aslan refused to eat over his Saturday’s hospitalisation despite the anti-sickness medication and rehydration, which was very unusual as his appetite was normally extremely good! In addition to this, his tummy was becoming quite bloated and uncomfortable. With him not known to have eaten something obvious that might have caused this, it was a mystery as to why Aslan was as poorly as he was.

Whilst he was declining despite supportive treatment, the decision was made to take him to surgery to find the cause of his vomiting, inappetance, and now bloating. An obstruction of some sort was a real possibility. Late on Sunday morning, Aslan was operated on to investigate his stomach and intestines. Once anaesthetised and relaxed, he brought up a large amount of fluid from his stomach, and in theatre his stomach was still really bloated with gastric fluid, which was emptied completely through a stomach tube. There was no obstruction within the stomach, but further along in the small intestine, there was a definite blockage. An incision into the intestine produced an answer – a very large, tightly wrapped hairball. This is a really unusual reason for an intestinal obstruction, as hairballs don’t normally get to this size, and if causing a problem, they usually are vomited up. Laxative paste, regular grooming and appropriate diets are the recommended preventative actions, which Aslan would follow going forwards.

Aslan was stitched up and spent the rest of the weekend recovering from his anaesthetic. His recovery was slow however, and he still didn’t want to eat initially. After a few more days being hospitalised, and the use of appetite stimulants and medication to help the gut move and heal, Aslan eventually started to eat and was allowed to be discharged home. He took quite a while to regain his appetite, and his skin wound suffered a few complications that required antibiotics, but over two weeks after his first admission to the practice, Aslan was officially signed off in the hope he would never suffer from such a monster hairball again.