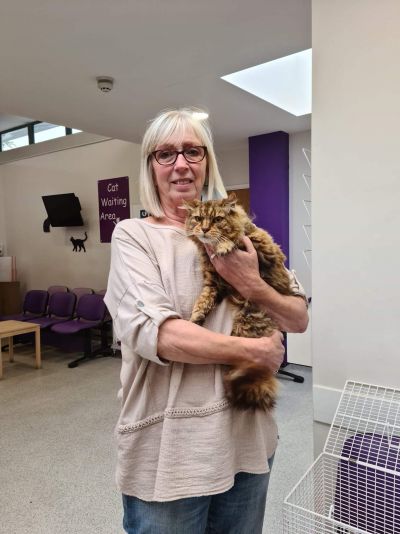 Pet of the Year Finalist 2020: Missing cat reunited after 6 years!

Having your pet go missing is one of the worst things that can happen to you as a pet owner. Just imagine how that feels, when days become weeks, months and then years. Not every missing story has a happy ending; but this week we were privileged to be part of one with Buddy – 6 years later! Microchipping is one of the most important things you can do for any pet, as it is a means of contact for a lost owner and a way of reuniting – if a pet either goes missing, is involved in an accident and requires urgent veterinary treatment, or even if it gets stolen. This can be especially important with cats, due to their tendency of roaming and wandering, as well as their penchant for moving in with others in the hope of an extra meal!

One of the most common times cats can end up going missing are following a move of house. Cats can become disorientated, trying to get back home, and for this reason they are recommended to be kept inside for 3 weeks after a home move. Despite following this advice, following a move from West Bradley near Glastonbury to Stoney Stratton near Evercreech, Buddy unfortunately disappeared not longer after he was finally let out to explore. Buddy was always confident and happily left to this own devices, but as with quite a lot of cats liked affection on his own terms – he was quite independent rather your typical lap cat! It wasn’t uncommon for him to wander for a few days, returning after a long jaunt. His previous home was on a quiet lane and with his owner also keeping his horses, he was often happiest hanging about the stables for long stretches of time. Shortly before his change in surroundings, Buddy was unfortunately involved in a road traffic accident, and came off worse after an altercation with car, ending up with a broken jaw that had only just healed before he went missing.

The move happened in 2014, and although a few days without him wasn’t too out of character, a while passed and his owner became very concerned, contacting neighbours and local veterinary practices to see if cats matching Buddy’s description had been handed in, but no news came back. Weeks turned into months, then years, and Buddy’s owner assumed the worst, fearing she would never see him again. Although forever hopeful, and perhaps wishing that he had taken up residence somewhere else rather than ending up in another car accident, there was an overwhelming sense of sadness and lack of closure.

Fast forward six years to this year, and a phone call came through to Buddy’s owner. As it turned out, a cat had been handing around a farm in Evercreech for the last 8 months. Whilst initially timid and looking a little scrawny, the cat was getting more and more confident at approaching the farm residents. He started to feed well though and gradually became quite tame. Eventually he was able to be caught in a carrier and presented to the practice to get a check over. He was found to be a little skinny (probably in need of a worming treatment), but otherwise looked well considering. At this point a microchip scanner was passed over him, as is protocol for any stray cat. Luckily enough, the scanner revealed a microchip. To everyone’s relief, the microchip details had been kept up to date with accurate recent telephone numbers – unfortunately this is not always the case.

So, when the call came in that Buddy had been located, his owner simply couldn’t believe it after all this time. There was to be no mistaking the microchip however, and when she came to the practice to visit, she was overwhelmed with emotion and confirmed the cat as hers. Buddy was incredibly happy to see his owner after six long years out in the country. Although initially sceptical about how Buddy would fit into his new (old) home, he settled in right away, eating and sleeping well and thankful for a roof over his head and regular dinner times! We will never know where has been and the adventures he got up to over the last six years, but Buddy’s owner is just glad of the microchip that reunited them both.