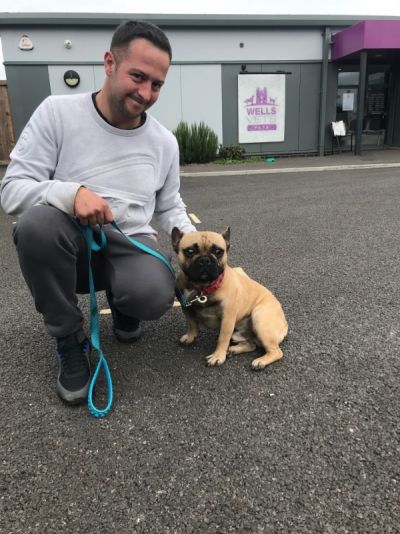 Eye issues are something we see all the time at both of our practices, with none more dramatic than when Ace was brought into our Wells branch one evening.

Ace is a lovely (if not a bit wriggly!) French bulldog who had been having eye drops from his previous vets for 1-2 weeks to treat an ulcer on his eye. It was reportedly getting better however when seen at our Wells practice at 5.45pm on a Friday evening it looked far from stable. The ulcer, which was effectively where a chunk had been taken out of the surface of the eye, looked very deep indeed.

In fact it was so deep that it was down to the last layer of cells before the eye would have perforated and burst. When they are this deep they are called a 'desmatocoele', and they have quite a characteristic appearance as this thin layer of cells actually bulges outwards before bursting. This was not something which could wait until the morning. At this point there are really only 2 options, either operate to try and close/seal the ulcer, or remove the eye before it bursts.

After a discussion with Ace's owners we opted to try and save the eye because he was still only a year and 3 months old. Ace was immediately put under a general anaesthetic to ensure he could not damage the eye further and was prepped for surgery. There are a couple of surgeries which can be performed to seal deep ulcers and the one we performed is known as a conjunctival pedicle graft. This is where a section of conjunctiva, which is the layer lying on top of the whites of the eye and lines the inside of the eyelids, was lifted up and cut out to form a flap. The flap was still connected to the rest of the conjunctiva at its base so it could be swivelled around and laid across the eye and on top of the ulcer. Once this had been achieved the flap was stitched into its new position by a very steady hand with very fine suture material as the stitches have to be anchored to the surface of the eye itself.

All we could do now was wait to for the graft to take. The graft works by not only sealing up the ulcer defect but also providing a good blood supply to the area to encourage healing. Ace was started on antibiotic tablets and continued his antibiotic eye drops and pain relief. He was seen for regular checkups over the following 5 week period, with his most recent one last Friday.

Although it takes time, the graft has eventually taken well and the eye is looking great. His owners report his eyesight from the eye is improving all the time. He will always be left with a slight scar in the area which will continue to fade over the coming months, but I'm sure he won't be bothered