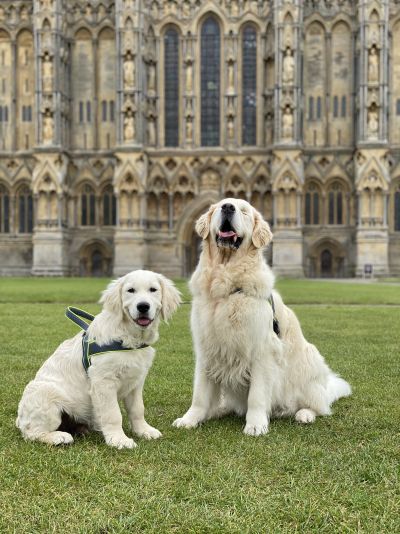 This week’s story started nearly two years ago. In fact, 11 year old Golden Retriever Tao has been a regular face at the practice ever since he was a bouncy 8 week-old puppy, visiting for his yearly vaccinations, health checks and the odd minor health complaint. These visits tended to be straightforward as Tao was generally a very happy and healthy dog.

Early last year however, his very worried owner brought him to see us convinced something was seriously wrong. Tao suddenly appeared painful over the left side of his face and was flinching in response to movements around him. He was certainly distressed and unsettled, which was unusual behaviour for him. Our examination revealed something very worrying – not only was Tao indeed in a lot of pain but he had become blind in his left eye.

Eye problems are a very common complaint in veterinary general practice, and in almost all cases, they are not serious. However we know that, very occasionally, eye conditions can be a true emergency and that sudden onset ocular pain and blindness require urgent action. As such, Tao was admitted for us to sedate him and examine his eye properly.

With Tao under sedation and his pain controlled, we could see that his left eye was deteriorating rapidly. His cornea was becoming cloudy, indicating that it was swelling, and we were no longer able to examine the internal structures of his eye as a result. We measured the pressure in his eyes, using a device applied to the cornea, and found that it was raised in his affected eye, giving us a diagnosis of acute onset glaucoma.

Glaucoma is a condition in which the pressure within the eyeball (intraocular pressure) gets too high, and it can have many causes. In some cases it develops secondary to another eye problem but it can occur on its own, due to a genetic defect in the way that fluid is circulated around the eye. Whatever the cause, the build-up of fluid results in increased intraocular pressure, leading to intense pain as well as damage to the delicate structures within the eye. In acute cases glaucoma will rapidly progress to cause irreversible damage and permanent blindness.

We knew that immediate referral to an ophthalmology specialist would offer Tao the best chance of successful management – identifying the underlying cause requires specialist knowledge and equipment, some of the treatments for these conditions are not available in general practice and, if there is any chance of saving the eye, treatment must be instituted as early as possible. Luckily his owner was able and more than willing to have Tao referred so we arranged for her to take him straight to Bristol Veterinary School at Langford for assessment.

When Tao arrived at Langford they were able to conduct specialist tests and diagnosed primary glaucoma due to a defect in the fluid balance mechanism within his eyes. Unfortunately they also advised there was already so much damage to his optic nerve on the left side that his vision would not return, so the best approach was to remove the eye. Tao proceeded with his surgery and recovered really well. It must have been a huge relief for him to have the source of all that pain removed.

While Tao’s original problem had been addressed with the surgery, there was now a concern about his other eye. His right eye showed no signs of a problem at that stage, but his condition was present in that eye too and the specialists informed Tao’s owner that it was only a matter of time before he started to develop glaucoma again. The good news was that there were treatments that could be instituted straightaway to help delay the problem.

Many owners would have been overwhelmed with the idea of managing a large, boisterous dog with reduced vision, daily medications and the looming prospect of complete sight loss. At 10 years old, Tao was considered a senior dog for his breed and it would be easy to think this condition might end up being life-limiting. However, it was at this point that Tao’s owner made the decision to face his diagnosis in an amazing proactive and positive way. Firstly, she was determined to preserve the sight in his remaining eye for as long as possible. She learnt as much as she could about Tao’s condition, followed the specialist’s advice with Tao’s medications and kept in regular contact with them to ensure he was managed as well as possible.

At the same time, she also had the foresight to begin preparing Tao for the day when his remaining vision would fail. She worked with a local dog trainer, teaching Tao to respond to sound and touch, rather than visual cues. Tao and his owner worked diligently to consistently reinforce their already close bond and build on this training.

For nearly a year, Tao’s owner managed his remaining eye with perfect precision, liaising with us and the specialists about his treatment with special eye drops. Occasionally he would develop symptoms of early glaucoma but his owner became an expert at recognising the subtle changes that occurred before his intraocular pressure reached dangerous levels and small adjustments to his medication would bring it back under control. Finally however, in January this year, he came to see us again with a swollen and painful right eye. He had been having repeated episodes of symptoms and was already on the maximum combination of treatments that could be used. There were very few options left for Tao and his owner requested that we go ahead and remove his remaining eye.

Tao recovered well from his second eye removal and almost immediately his training came into play. He adjusted to life without vision amazingly quickly and his training programme was developed further to help him manage daily life. Even though he is completely blind, the now 11 year old Tao continues to enjoy life to the full, with walks on the beach, playdates and all the fun of being a dog. What is more, Tao has become a bit of an online celebrity. It seems that his story has resonated with pet owners worldwide, advocating a positive and proactive attitude to life after sight loss.

Tao continues to go from strength to strength, not least with the arrival of his new buddy Oko. Dog owners will know how a new puppy can sometimes give older dogs a new lease of life and this is certainly no different for Tao. In fact, it seems that Oko has taken it upon himself to become Tao’s new guide dog!

Tao and his owner have been inspirational for us at the practice. While we understood all about his condition itself, we have learnt from them how much can be achieved with a positive attitude, preparation and dedication. They have shown that a life-changing diagnosis for a dog does not necessarily have to mean a reduction in quality of life, even in their senior years. This is certainly an important message for us all to keep in mind – perhaps we should all try to be ‘a little more Tao’!