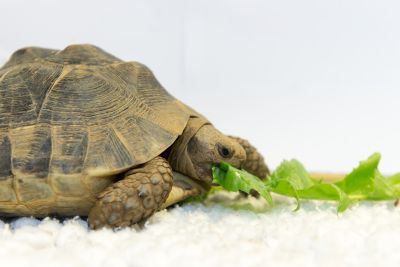 It started with a tortoise…

I’ve enjoyed treating reptiles for many years now. It all started when I was a New Graduate vet in my first job (and no, I’m not admitting how long ago that was).  A lady rang to ask for a vet to visit her to check her tortoise after hibernation. “No problem”, my then boss told her, “We’ll send our tortoise expert”.  I looked over my shoulder to see who he meant, and was somewhat taken aback to realise he meant me.  The other vets at that Practice freely admitted they had little knowledge of reptiles, and even less enthusiasm to find out more. After all, we were already treating everything from dairy cows to children’s ponies to cats and dogs. I frantically revised the very basic teaching I had received at University about tortoises, did some more reading up, and went out to meet Crusty and her owner.

That was a turning point for me.  I was fascinated by Crusty (a Testudo graeca subsp whitii, or bloomin’ big spur thighed tortoise to you and me).  She was already a very mature lady (probably around 80 years old at the best estimate), and had been with her owner for 50 years.  She lived in a walled garden, sunning herself amongst the rhubarb on hot days, and hibernating by digging into the soil every winter.  But that Spring she was very slow to wake up from hibernation and wouldn’t eat.

Roll forward a few years, and that idyllic sounding tortoise life rings alarm bells for me every time.  Many people in England remember having a pet tortoise in the 50s and 60s, and most of them lived in the garden, like Crusty.  But think on this: a Mediterranean tortoise can live to 100 years old, so where were all these pets come the year 2000 and beyond? The answer is somewhat brutal. Those pet tortoises were almost all captured from the wild in north Africa and southern Europe, and brought to northern Europe , often in appalling conditions, so be sold as pets.  One study estimated that less than 1% of those captured survived their first year in captivity.  Those, like Crusty, that did survive were the physically elite tortoises, the tough ones that could just about tolerate the cold temperatures and long winters in northern Europe.  But they were just getting by, not thriving, and as they grew older they could no longer cope without the sunshine and heat they are designed for, and they became ill and passed away. Often, like my mother’s childhood tortoise, Tommy, they just never woke up from hibernation, and no-one thought much of it, as they had only been “penny turtles” in the first place.

Reptiles are cold blooded, and rely on their environmental conditions much more than mammals do.  They need different amounts of light and heat to perform different functions, such as digesting, resting, fighting infections and so on.  For example, a Mediterranean tortoise’s immune system doesn’t function effectively in temperatures below 18C, so when they are too cold they are very prone to catching colds. And so looking after a reptile is really a case of looking after the environment, then the environment can look after the pet.  I find it easiest to think of where that reptile lives in the wild, and try to recreate that for them.

Let’s look at our spur thighed tortoise. Crusty would have been born, most likely, in North Africa, perhaps Morocco.  It’s pretty hot and dry there, some areas won’t see heavy rain storms for years at a time. The days are a bit shorter and colder in winter than in summer, but not as much as in England.  It gets very hot during the day in Summer, over 35C isn’t unusual. Frosts are rare. In this environment, low growing plants will have dark, tough leaves, and wild growing fruit is rare and tough to get into.  When you think like that, you can see why as Crusty approached old age she stopped coping so well in her walled garden in Gloucester, where it was damper and colder than her native land, with less hours and less strength of sunlight, and long winters where she was too cold to keep functioning, so she would hibernate for months at a time, compared to the few weeks of light sleep that her wild counterparts would do.  And sometimes, buried in a thin layer of soil, she would have been exposed to frosts, which caused ice crystals to form in her eyes, so she was virtually blind by the time I met her. Tomatoes and strawberries were her favourite foods, but they weren’t the tough, green leaves that she was designed to eat, and they were too high in sugar and low in fibre and vitamin D.

Like many poorly reptiles we treat at the vets, the first step to getting Crusty well again was to create an environment in which she could thrive.

We gave her an indoor enclosure with a UV light on for 12 hours a day and a heat lamp to bask under, so she felt like summer in the Mediterranean. We checked that the coolest end of the enclosure didn’t get below 20degrees Celsius, and the hottest area was around 30 degrees Celsius. This is the Preferred Optimum Temperature Zone for a spur thighed tortoise, and every reptile species has its own POTZ that is essential for a healthy life. Having hibernated for massive 5 months that year, Crusty was dehydrated and low on blood sugar, so we bathed her frequently in a glucose and electrolyte solution (tortoises tend to drink when they sit in water, and can also absorb water via their, ahem, back ends). Within a few days, Crusty was eating well again and marching around her enclosure.  We stopped her strawberries and tomatoes (except a little bit on special occasions), and kept her eating washed weeds from our gardens, like dandelions and plantains, with an extra supplement to provide calcium and vitamins, to make up for the lack of Vitamin D that many reptiles suffer when they don’t get exposed to enough UV rays for bright sunlight.  On this occasion, sorting out the environment was enough to get Crusty well again, and luckily she hadn’t succumbed to the liver disease or respiratory infections that befall many tortoises in the same situation.

As you can imagine, this was quite an undertaking, both physically and financially for Crusty’s owner, but it was what her pet needed in order to get well. And, in fact, it’s what every reptile will need, in some form or another, in order to thrive.  This is why when you take on a reptile, you are taking on far more than just the animal; you will need to provide their entire environment, and that means a suitable enclosure or vivarium, lighting, heating, substrates, hides, plants and the right foods, which need to be provided fresh (or even live for insect eaters!) It’s great fun if you throw yourself into the task, but it’s not cheap and it will take up a considerable amount of time, and space in your home.

Crusty went on to live another 10 years.  When her elderly owner moved into a care home, she asked me to take Crusty to live with me, and I learnt so much from looking after her.  Treating this first tortoise patient made me realise how little I knew about medicine of exotic pets, and so I then spent years studying and getting experience with other vets who treated exotic species, and even running an exotics pets referral service for a while. But my real aim was to be a useful GP for the less run-of-the-mill pets, and I hope that’s what the owners of the lizards, snakes and tortoises who come to us will find.