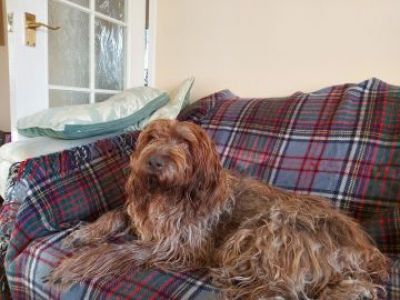 Fortunately these days diabetes mellitus is a well known and publicised condition, mainly due to its frequency in humans, but it is also commonly recognised in dogs, with many pet owners being aware of symptoms, diagnosis and treatment. This type of diabetes is characterised by a high blood sugar level, and symptoms can be as similarly observed in people. Inga displayed all the classic signs of this condition, which led her on the right path to treatment.

Inga is a 12 year old female German wire-haired pointer. Her owners made an appointment for her at the practice when they noticed she was lacking in energy, drinking a lot, and seemed to have lost a lot of weight in a short space of time. Inga had been checked very recently at the practice, and in the short term between appointments, there was a clear difference in her demeanour and she had lost almost 3kg. These changes had clearly happened quite suddenly and a primary concern in a dog of her age with these symptoms had to be diabetes mellitus.

Blood and urine tests confirmed everyone’s suspicions – glucose (sugar) levels were abnormally high in Inga’s bloodstream and were detected in her urine sample, which is always an abnormal finding. The two findings together confirmed a diagnosis of diabetes mellitus. Inga’s pancreas cells had become faulty and weren’t secreting the hormone insulin to control her blood sugar levels – this meant she couldn’t maintain her weight and store energy, and sugar was being lost out into her urine, taking with it excess fluid and making her thirsty. To counteract this she would need to be given an alternative, external source of insulin, via an injection administered by her owners twice daily.

Inga’s owners were incredibly dedicated to her and immediately set about plans to give her the best treatment possible, committing their future life to her care and new routine. They would need to be on hand morning and evening for the rest of her life, or make suitable provisions for her to receive her injections, as well as learning how to safely inject Inga, store needles, and handle insulin. In addition it was advised for them to keep her diet and exercise as constant as possible, and at the same time to be aware of potential complications of ‘hypoglycaemia’ – low blood sugar, that can sometimes occur if her dose of insulin is too high or repeated by mistake. These complications would be shown by wobbles, weakness or even seizures. Determined to help her as much as possible, they set about keeping a thorough diary to monitor her progress day by day.

Two weeks after her treatment was started Inga returned to the practice, and it was pleasing to read her diary entries. Day by day, she had steadily improved and was returning to her normal self. It could be seen on arrival that she already had more energy and was brighter in her eyes. She was also gaining weight well. Inga stayed at the practice for a day to have her blood sugar monitored repeatedly over the course of a few hours, to see how it varied following her meals and morning injection. This ‘glucose curve’ test showed that the insulin was working to lower her blood sugar, but that the dose needed increasing (as is usual once starting treatment) to achieve greater control and keep her sugar levels lower for as long as possible.

After a dosage increased, Inga returned a further three weeks later but had developed a new symptom. A few times her owners had noticed that she had tripped off the kerb of the pavement and that she had even bumped into a few things. Immediately on her examination, it could be seen that she had developed cataracts since her most recent vet visit. Her eyes were cloudy – the area in the middle of each eye that would normally be black and changing in size depending on light levels, was in fact blueish, dilated and fixed in position, not allowing any light to enter the back of the eye so that she could process pictures. The lens of her eye that usually focuses light had been filled with a protein due to higher than usual sugar levels, leading her to be almost completely blind. Unfortunately this can be a common complication of diabetes mellitus, but can also be seen as a normal age related change. An option of specialist ultrasound driven surgery to remove the cataract may be available once her diabetic condition is completely stable, but dogs can cope well with blindness and everyone’s primary concern was controlling her sugar levels.

Tests at this visit confirmed that her condition was progressing in the right way, but that she still needed a slightly higher insulin dose. With each visit came improved diary entries and better news each time, and it is nice to know that with her owners hard work and monitoring, Inga is well on the road to recovery.