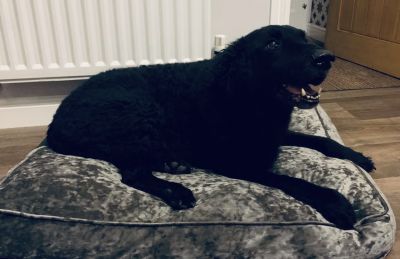 Barney is a beautiful 12 year old curly coated retriever, who I remember well from 10 years ago when he injured a front leg culminating in a specialised operation to fix a joint. Apart from that interlude, he has lead a fairly quiet life, as far as we are concerned, and other than feeling a bit slower than in his younger years, he is looking very fit and spritely for his age.

So, it was a real concern when his owner rang recently late in the afternoon to say that he had gone out into the garden as usual and then been found 20 minutes later unable to get up and trembling all over. He was brought straight down to be examined.

When Barney arrived to see me, it was clear that something was seriously wrong. He was unable to walk, or even stand and was tremoring all over. Immediately, it looked to me as if he was suffering from some form of poisoning, and I went through all the obvious possibilities with his owners, drawing a blank. Then as we talked through what else he could possibly have eaten, his worried owners mentioned that the food bin had been left open after the recycling had been collected. When I asked, it was confirmed that there had been some food in it which would have gone a bit mouldy.

This suddenly made sense. Barney was suffering from intoxication with ‘tremorgenic mycotoxins’. These are produced by the fungi that may be present in some mouldy foods, particularly dairy foods such as cheese. It’s not clear exactly how they cause symptoms, but it’s thought that they may interfere with transmission of nerve impulses. The effects usually come on within 30 minutes and Barney was a typical case. In severe cases, a dog can suffer liver damage and convulsions, which can be fatal.

Once we knew what was going on, we could start to treat Barney. The first thing to do was to make him vomit, in case there was more in his stomach that he hadn’t absorbed. This was a worry, as he couldn’t lift his head up very well, and there was a worry he could inhale some vomit. We gave him an injection to make him sick, and carefully supported his head while he brought up his stomach contents, then gave him another drug to stop any further sickness. While this was going on, we also placed an intravenous line and started him on a drip and gave him a bolus of a medication to stop the tremors. He responded well to this and half an hour later was able to walk to a kennel with support.

He was constantly monitored through the evening and given regular doses of oral activated charcoal which acts to mop up any more toxin in the gut to prevent it being absorbed. This is not usually a popular treatment, but Barney was very tolerant. By bed time, He had almost stopped tremoring and was able to walk outside unsupported which was an encouraging sign.

We checked Barney regularly through the night, and he continued to improve so that in the morning he was walking normally, eating well and had no tremors. He was able to go home to continue his recovery, and when I saw his owner 2 days later, she told me he was doing well, although he was milking the situation for all the sympathy he could get!

Barney’s experience really shows just how dangerous mouldy food can be, and although we think of dogs as natural scavengers, something as innocuous as a piece of mouldy cheese could be really dangerous.