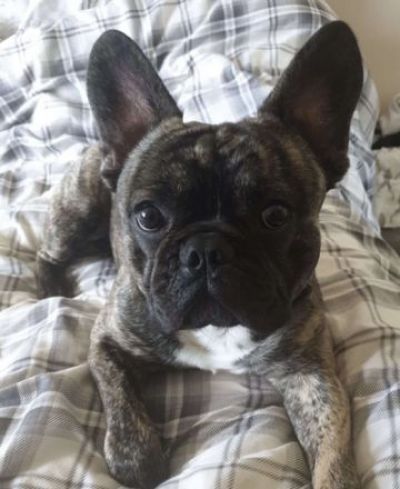 Vinnie the young French Bulldog is certainly full of character and is well-known to the team. In his 2 and a half years he has visited the practice several times for various mishaps and he certainly seems to be one of those dogs that gets himself into trouble. Whenever he comes in he is most definitely a handful. He is friendly and playful but it’s fair to say he doesn’t always want to be examined and although he is small he is definitely strong!

Vinnie was only just getting over a sore eye, having been in for an appointment the previous week, when he decided to get himself into even more mischief. His owner, waking early with the family’s young baby, let him out into the garden of their new home. Moments later he returned looking very sorry for himself and before long he started vomiting. His owners were alarmed to see that he was bringing up some plant material and, after a quick check of the garden, it was clear that Vinnie had decided to have a chew on one of the shrubs. They were very worried – they had only recently moved into the house and had no idea what plants were in the garden.

As Vinnie was clearly distressed and continuing to vomit his owners decided they must call the surgery for advice. As we had just opened for the day, Vinnie was booked in for an early appointment and his owners were told to bring him straight in.

By the time Vinnie arrived at the practice he was looking dull and depressed, he had been sick more than 15 times and was starting to bring up fresh blood. We immediately admitted him for treatment and, even while we assessed him, he was continually vomiting blood and started to pass bloody diarrhoea – the consulting room looked like a war zone! Vinnie was started on intravenous fluids and we gave him antibiotics and medications to help soothe his irritated gut lining. As his abdomen was very uncomfortable he was also given pain relief. Although it was heartbreaking to see Vinnie retching and vomiting we were reluctant to give him anti-nausea medication at this point because we were keen for him to empty his stomach of any remaining plant material.

Vinnie was looking very sorry for himself and we were worried about his condition as he was clearly suffering the effects of having ingested something toxic. However, we were happy that he was stable, we was showing no signs of dehydration, septicaemia or shock, and his vomiting was starting to settle down as we worked with him. However, we still didn’t know what he had consumed, and therefore what else we needed to do.

Despite their distress, Vinnie’s owners had had the presence of mind to bring a cutting from the plant Vinnie had eaten with them, so we had a clue to work with. But while we are familiar with some of the common garden plants which can be a threat to our pets, there are a huge number of potential risks in our gardens and, none of that day’s team being green-fingered, we didn’t know what this particular plant was. Thankfully, receptionist Sue was working at our Wells branch that day and we all knew how much she loves her plants. So a quick photo message to her solved the riddle – she had a look, and sent it to her friend at Brownes Garden Centre, who was most helpful.

The plant Vinnie had eaten was Pieris Japonica, which is known to be highly toxic to dogs. Some quick research told us that ingestion of this plant could indeed cause profound gastrointestinal effects, but that it also contained a substance that could cause potentially fatal irregularities of heart rhythm. So we knew why Vinnie had been so sick but now we knew he may also have further problems.

By this time, Vinnie’s vomiting and diarrhoea had stopped and he was looking a lot brighter on his fluids. His heart rate was normal and he had a regular rhythm so we were happy with his progress. At this stage we had to feed him some medicinal charcoal in an attempt to absorb any remaining toxin in his digestive tract but Vinnie was not yet feeling well enough to eat anything voluntarily so we had to syringe feed him his charcoal mixed with water. This is something that is very much easier said than done! After much cajoling and wrestling, Vinnie had finally consumed his charcoal, but there was also a fair amount all over the kennels, several team members and Vinnie himself. He looked very pleased with himself and the drama he had caused.

As the day progressed, Vinnie was maintained on his fluids and we monitored his heart rate carefully. He continued to go from strength to strength and his heart rate and rhythm remained consistent, with no cause for concern. By the end of the day, Vinnie was full of beans, eating happily and looking thoroughly impatient with being hospitalised – he was definitely ready to go home.

Over the following few days Vinnie’s owners kept a close eye on him. Although unsurprisingly it took a while until his motions were completely back to normal they saw no further ill effects from his mishap. It seems his profound immediate response to his dietary indiscretion is what saved him from the potentially more severe effects. And thanks to his owners’ swift thinking we were able to help him through this distressing episode and ensure it didn’t progress to anything more serious. Rest assured they have now thoroughly checked their new garden to ensure that Vinnie can enjoy it to his fullest – and we’re sure he will!