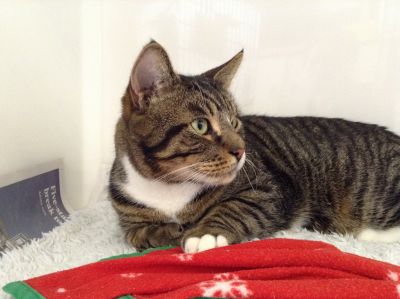 Waking up at the weekend after a hard week at work usually brings the possibility of relaxation – perhaps a lie-in, a leisurely coffee and a bit of time to yourself. However, as the owners of Murphy, a five year old cat, awoke one Saturday morning they did not get the relaxing start to the weekend that they were looking forward to. Instead they were greeted by the sight of their much-adored pet who had obviously been involved in a road accident and had severe facial injuries. Their planned lie-in was replaced with a very stressful emergency visit to the vets.

As Murphy arrived with us we could see that he was not very well at all. It was clear that he had sustained a significant head injury and he was very subdued. His lower jaw was held open and was fractured down the centre. He was conscious and able to react to us but it was evident that he was in a lot of pain. We knew he was also likely in shock and may well have further trauma that was not so obvious. Our first priority was to admit him and get him comfortable and stable before we assessed the degree of his injuries.

Murphy was placed on intravenous fluids and potent pain relief.  Once he was stabilised and comfortable Murphy underwent anaesthesia to clean up his wounds, examine his jaw more thoroughly and take X-rays. Once anaesthetised it became apparent that Murphy’s jaw was more than just fractured.  His jaw would not close and moving it caused his right eye to bulge – all signs that the jaw was dislocated as well. X-rays of his skull confirmed that the right side of his jaw had been pushed out of the joint and moved forward.

We started Murphy’s treatment by surgically placing a wire around the two separated sections of his lower jaw to secure them back in position.  This just left the dislocated right side to deal with, and for this we needed a pencil! When replacing a dislocated jaw we often use a pencil as a fulcrum to enable us to lever the back of the lower jaw back into its hinge-like joint. With the pencil placed sideways across the back of Murphy’s mouth we were able to apply the right pressure to close the mouth whilst also applying force on the jaw to reposition the dislocated joint. And with the familiar satisfying ‘clunk’ that always comes as a big relief, Murphy’s jaw was back in place. His eye sunk back into a normal position and his jaw could finally open again. Repeat X-rays confirmed that his head injuries had been successfully repaired and we applied a soft tape muzzle to keep his jaw stable for a few days while his disrupted muscles healed.

With Murphy’s jaw corrected, his anaesthetic having gone well and his ongoing intravenous fluid support, things were looking up. Murphy was moved to recovery and we were going to update his owners on his progress. But Murphy wasn’t out of the woods yet – the nurse monitoring him suddenly raised the alert that his respiration was slowing and his heart rate had dropped. With a real concern that he was going into cardiac arrest this was an absolute emergency. His tape muzzle was ripped off, he was re-intubated and given oxygen and intravenous adrenaline.  Within moments his heart rate had responded well and we breathed a sigh of relief. As he continued to recover quickly there was now no opportunity to re-apply his tape muzzle but we were most concerned with seeing him come round smoothly. In fact, he recovered very well, as if nothing had happened, and by later that night he was lapping liquid food happily with no apparent need for the tape support.

Murphy was hospitalised over the weekend for monitoring and pain relief.  He progressed well and started to walk around and exhibit more normal behaviours.  As he improved and moved more it appeared that he also had some discomfort around his pelvic region.  Murphy had further X-rays to clarify the cause for this and these confirmed that two of his vertebrae had been compressed – he really had been in the wars. Thankfully though, the location of the spinal compression meant that it should require nothing more than rest and pain-relief to heal. So we made a plan for Murphy to go home to his caring owners and rest.

Several weeks passed, Murphy’s back gradually improved, and he ate well throughout. We finally saw him again at a point when he had just been outside and caught his first mouse since the accident occurred.  This was a great sign that he was back to his agile best and we could finally remove the wire in his jaw.

Murphy was incredibly lucky that, despite a considerable trauma to his face, the injuries he was left with were treatable and that he had owners that did everything possible to help his treatment.