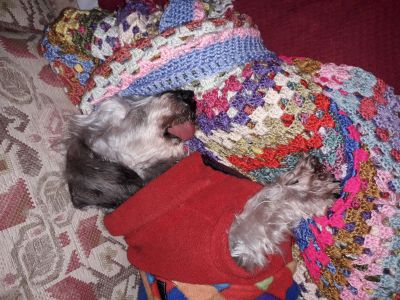 There are several different ways of taking on a pet.  Many do research for weeks or months, and then find the most appropriate breed for them at their local rescue centre or from a breeder.  Equally others fall into it, as fate plays its part.  The owner of Thomas however is one of those incredibly kind soles that takes on pets when they are rescued, older, and in need of considerable treatment and care.

Thomas, a neutered male Dachshund, was 11 years old when he was first rescued and brought in by his new owner two years ago.  Since that time he has been seen more than most, and caused his owner considerable concern, not to mention expense.  Indeed, if we were to mention every condition he has been presented with then his story could fill this paper on its own.  On his first visit Thomas had lost most of his teeth to advanced dental disease. More worryingly the infection had eaten through his gums so the empty cavities went straight through to his nasal cavity in multiple places.  This meant that when he ate food could end up coming out of his nose and caused considerable inflammation and infection to his nasal cavity.   He also was blind with both eyes affected by longstanding cataracts.  From day one it was obvious that Thomas needed a lot of care.

We needed to make him comfortable and started by performing and operation to close the holes in his gums.  There were several sites needing closure and we did this by creating flaps of tissue from his existing gums and suturing them over the open areas.  After the first procedure we managed to close 80% of them and it took a second procedure several weeks later to completely heal his problem mouth.

That was not the end of his issues, as Thomas started to experience problems with his eyes whilst still under treatment for his mouth.  He was referred to a specialist ophthalmologist who advised one of his eyes was beyond saving but they could attempt cataract surgery on the other to save his sight – but there were risks.  Unfortunately this was to be the case and six months later, and after three surgeries, Thomas has had both of his painful and blind eyes removed.

This was not the end of his health problems as Thomas started to experience urinary issues.  He would hold on to his urine for long periods and then developed urinary infections that caused him distress.  After lab tests to confirm the nature of the infection, and courses of antibiotics, we have been able to manage this at present with his owner just giving him a muscle relaxant periodically, that makes it easier for him to have a wee.

I can understand that some may question doing all this treatment.  However, the reason becomes clear when you meet Thomas and see that throughout all of this he is a very loving and happy dog.  Despite being blind he has become accustomed to his surroundings and navigates his way comfortably around the house.  Equally he eats well and from the skinny dog that was first brought in the owner now has to monitor to make sure he doesn’t put on weight.  For his owner, and us, the reward is to see a little dog , that had been suffering, now very much enjoys life.  This is all thanks to his owner who has invested their time and finances in order to make sure it could happen.