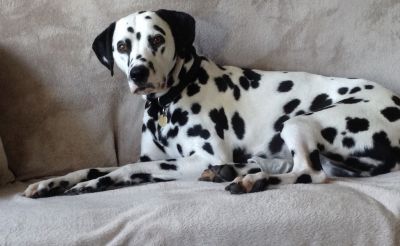 Merlin and his many trips to the vets

Dalamatians are an unmistakeable and much loved breed, but seven year old Merlin is definitely a familiar and recognisable face at the practice due to his regular visits because of various ailments over the past few years. As if having a spinal problem in his neck wasn’t enough, Merlin then had problems going to the toilet that resulted in surgery, before having several blood tests to identify an underlying hormonal condition.

Merlin’s first regular visits came during a period of neck pain, almost four years ago. He was off colour, lethargic, and would intermittently yelp out. When he came in to the practice, his head was lowered and he walked with stiff front legs. His neck was painful when moved to the side. First line anti-inflammatory pain killers didn’t fully control the issue, and when his back legs became unsteady, he was referred to the neurologist for a specialist examination and CT scan. This showed that Merlin had a condition known as ‘wobblers’, a painful condition affecting the spine of the neck, which as the name suggests often causes wobbliness.

After two rounds of spinal surgery to correct the problem, Merlin had a long road of recovery ahead of him as he was initially left unable to walk at all. Using much of his owners’ dedication (and strength!) he began to be able to walk with a special supportive harness, alongside regular physiotherapist appointments.

A year had gone by and after many months of rehab, Merlin was finally walking normally again – but then he became lethargic and subdued once more. Initial concerns were of a repeat issue with his neck, but a urine sample highlighted a severe infection, as many inflammatory cells and bacteria were seen in his urine alongside blood, and crucially, mineral crystals. X-rays were inconclusive but an ultrasound scan of his bladder revealed the presence of a few small bladder stones. Dalmatians are prone to a particular kind of ammonium stone forming in their bladder.

After courses of strong antibiotic and an introduction to a prescription diet to change the acidity of his urine, Merlin improved – until on Christmas Day he fell ill once more and was straining to urinate. A blockage from a small stone was found, and his bladder was flushed via a catheter to remove the obstruction, before he was scheduled for surgery in a couple of days’ time to remove what were the remains of four stones in his bladder. Merlin has since remained on his special urinary diet and a specific medication to prevent the stones from forming again.

During all of this time Merlin had been battling with low level skin irritations as well as a weight problem over this last year, which had recently become more pronounced despite his owner’s attempts to get him to diet. Merlin was noticed to be more tired which was originally assumed to be due to him becoming overweight and getting older. When he was found to have a low heart rate, despite being notoriously anxious at the vets, this raised suspicion of an underactive thyroid. Hypothyroidism is fairly common in middle aged dogs, causing lethargy, weight gain, skin problems and a slow heart beat. A blood test showed a classic diagnosis - a low thyroid level coupled with high thyroid-stimulating hormones.

Merlin’s liver enzymes were elevated, which can be a result of hypothyroidism or a side effect of his medication, but his results were a little high so warranted keeping an eye on. Thyroid supplementation tablets were started, and Merlin responded well, losing weight and becoming livelier. Two weeks later, a blood test showed that his thyroid levels had risen, but his liver enzymes were higher. An extra morning of blood tests were then needed to determine Merlin’s liver function, with a fasted sample first thing in the morning and then a sample repeated two hours after a meal. These tests fortunately showed that Merlin’s liver was still working normally.

Merlin is now on supportive liver medications and supplements and will have regular blood tests across the year to monitor his liver as well as his thyroid hormone levels. This means that Merlin certainly won’t become a stranger to us, and nor will his patient and dedicated owners