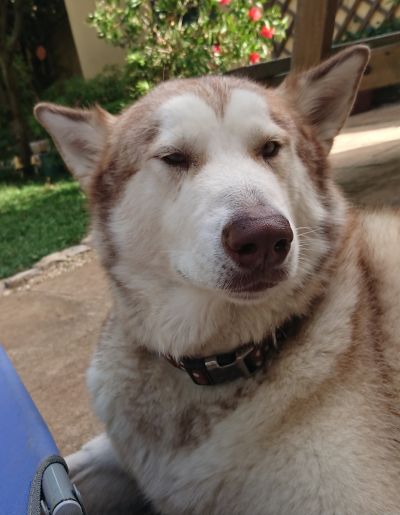 Samson has a retained testicle

One of the most enjoyable parts of being a vet is meeting the adorable new puppies and kittens that visit us, and getting the chance to give them a healthy start in life.  Getting their healthcare right from the very beginning is essential, helping to prevent problems occurring in the future.  As well as being a lot of fun, it’s also highly rewarding seeing  them visit month by month and develop from cuddly little patients into healthy adults.

Most of these pets are being seen for their routine health checks and vaccinations and, as part of these visits, they are thoroughly examined by a vet to ensure everything is where it is meant to be. For male dogs and cats one crucial part of this is checking that the testicles are literally where they are meant to be! This is because there can be potentially life-altering implications if they are not and this is undetected. And this was the case for Samson, initially a little fluffy bundle who is now a big, strong 1 year old Alaskan Malamute.

When Samson first visited us vet Greg concluded from his health check that Samson was generally very healthy but was missing a testicle, and it couldn’t be felt anywhere.  In neonates the testicles start off in the abdomen and gradually move down and into the normal position during early development.  However, occasionally this process doesn’t progress properly and so one, or both, testicles can remain within the abdomen.  Therefore it was likely that Samson’s missing testicle was somewhere in his tummy!

Samson was a very happy and healthy puppy otherwise, so why should we worry about the missing testicle?  Well while it may not be an immediate problem, we know that retained testicles are very likely to develop cancerous tumours later in life, which can be life-threatening. However, because the testicle could just be slow to descend, there was still a chance that it could make an appearance in the more usual place up to 6 months of age. So we opted not to do anything yet, but Samson was carefully monitored at every examination to check his progress.

At six months of age Samson’s missing testicle had still not made an appearance.  Therefore it was evident that, to prevent a tumour developing, we needed to proceed to perform a castration procedure on Samson. Although castration is usually fairly routine , it is  trickier in a patient such as Samson as we need to locate the missing testicle, which could be anywhere along the normal path of migration through the abdomen, and remove it from among the abdominal organs. Normally, this can create a relatively large surgical wound and quite a long operation that can leave patients a bit uncomfortable for several days.

The good news for Samson was that we were able to provide a newer surgical technique for his procedure, in which we use a laparoscope (surgical camera) through a 5mm incision to initially locate the testicle.  Once located we can then make a second small incision, of about 10mm, and use forceps to grasp the testicle.  The testicle can then be tied off and removed before the surgery is concluded by suturing the wounds, which in total are only 1.5cm in length.

It was the latter approach we took for Samson and, before long, he was back on his feet having been successfully castrated via the keyhole surgery technique, as well as the normal procedure for his other testicle.   After 10 days his wounds had healed nicely and Samson was completely back to his normal self.  Of course Samson had few concerns through all of this as he simply enjoyed being a normal, boisterous puppy, but his owners were certainly relieved to know that, due to their careful monitoring and veterinary checks, they had managed to avoid a life-threating event occurring in the years to come.