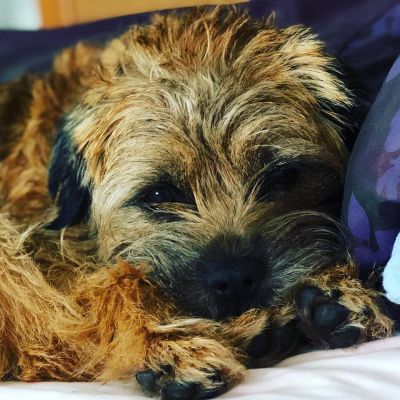 In the everyday life of a small animal vet, “have they eaten anything they shouldn’t have?” and “have any toys or items gone missing from the house?” are very common questions, certainly when dealing with dogs.  We find that most dogs fall into one of two main types. There is the first type – highly discerning, selective about what they pick up and unlikely to steal food – and then there is the other type. These are the dogs that eat anything they can. They like to raid bins, snuffle through cupboards, munch on disgusting finds outside, and their first reaction to discovering any new item in the house is to chew it.

Much of this is very normal canine behaviour, and most of the time the worst outcome is a bit of an upset tummy. However, it is worth remembering that a dog’s desire to chew and eat can occasionally get them into serious trouble, and being vigilant in preventing access to household hazards is really important. One patient recently gave us all a good reminder of this.

Betty the 4 year old Border Terrier is a well-known face at the practice and a lovely character. In keeping with her breed, she can also be prone to the odd bit of mischief. Her owners know this, and so are very attentive and keep a close eye on her. However, as will be familiar to so many, when relatives were visiting recently normal routines were turned upside down and the household held some new temptations for Betty. And so it was, that the family found, late one evening, Grandpa’s medication had been raided and chewed.

Betty’s owners immediately contacted us for advice and we began to piece together the evidence over the phone, to determine the potential for toxicity. First of all, we had to establish the medications involved. There were four different kinds of tablets amongst the packaging found. Three of the drugs were unlikely to cause any issues for a dog, but the other was ibuprofen, which can be highly toxic.

Ibuprofen toxicity tends to cause two main problems in dogs, with symptoms usually developing within 24 hours of consumption. At lower doses it can trigger ulceration of the digestive tract, resulting in severe bloody vomiting and diarrhoea, and progression to serious secondary complications. At higher doses it can affect the kidneys and cause acute renal failure. So we knew we had to take a potential toxicity seriously, and the next step was to work out how much ibuprofen Betty might have consumed.

It wasn’t known how many tablets had already been removed from the sections of blister packs before Betty had found them, and there were multiple small pieces of chewed tablets remaining. By piecing together the tablet fragments like a jigsaw, and examining the blister packs to see which had been emptied by a human, it seemed most likely that Betty had only consumed a small amount.

By this time it was around 11pm and Betty’s owners felt that she would have discovered the tablets at around 2pm that day. In this time frame any medication consumed would have already been absorbed and there would have been no benefit in making her sick or giving her a binder. As Betty was showing no sign of any illness at that time and because the likely dose consumed was so low, we decided that she should simply be monitored overnight by her owners.  However, the uncertainty about exactly how much ibuprofen she had consumed was a real concern, and played on everyone’s minds overnight.

The following morning we saw Betty, who was still happily oblivious to any of the trouble she had caused. We took a blood sample to assess her kidney function and ensure that there was no sign of any developing problem and we started her on a treatment to help protect against any ulceration – this was, in fact, one of the other medications she had stolen so she had already started her own treatment! All the signs looked good, and a repeated blood sample four days later confirmed that there was no damage to the kidneys. It seemed Betty had had a lucky escape.

Ibuprofen is amongst the most common causes of toxicity we see in dogs, alongside other common culprits such as chocolate, rat poison and slug bait. One of the problems is that this is such a commonly used medication and is often inadequately ‘dog-proofed’ – dogs commonly discover a packet in handbags, on bedside tables or kitchen surfaces.  Very often, as in Betty’s case, there is uncertainty about how much could have been accessed and we need to treat for the worse-case scenario. Sometimes, owners don’t discover the problem until their dog is already showing symptoms, at which point costly and intensive treatment is necessary and the outcome is not always good.

So, however likely a dog is to chew and eat items they shouldn’t, it always pays to be vigilant around the house and ensure that temptation is kept out of reach.  And if you are concerned that your pet may have consumed something dangerous it is always recommended to seek veterinary advice straight away, just as Betty’s owners had done. Betty was lucky, but if she had consumed just one more ibuprofen tablet, her owner’s swift actions could have saved her life.