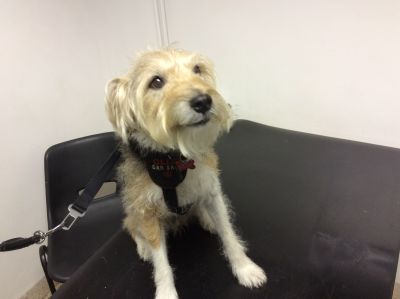 Barney needs help with a lump

Lumps and bumps are a common reason for dog owners to come and see us at the practice. Many dogs live with the odd warty growth or fatty lump for years – we get used to their size and character and check them at each visit. Nevertheless, when an owner discovers a newly appeared lump on their dog it can be a real worry, so they are keen to have a vet assess the lump and hopefully provide some reassurance.

In the consulting room, we understand these concerns. We know that there are many different types of skin lumps that can develop on dogs, and that the majority of these are likely to be harmless. The problem, however, is that we cannot diagnose the type of lump we are dealing with simply from its appearance. There are characteristics that can suggest a lump is harmless, but it is possible for a benign mass to appear very similar to a potentially malignant one. This was the case for Barney, the 11 year old terrier cross dog.

Barney’s owner brought him in to see us back in April, after finding a lump on his shoulder. Barney’s lump was about the size of a grape, sitting just under the skin. It was smooth, with a defined outline and was not painful for Barney. All of these characteristics suggested that the lump was likely to be benign, but his owner was understandably concerned and, although she was very vigilant with Barney, she wasn’t sure how long the lump had been present. We knew that, despite appearances, this could be the start of a serious problem, so we agreed to closely monitor the lump.

When Barney returned to see us around 6 weeks later, the lump had grown to about the size of a plum. This was a significant growth and we knew we needed to take action. Our first step was to take a small sample of cells from the lump using a needle. This procedure, known as a fine needle aspirate, is a simple and minimally invasive way for us to get a provisional diagnosis on a lump. The aspirated cells are sent away to the lab for analysis. Often, the pathologist can tell us what the lump is likely to be, but there is always a risk that the cells aspirated are not representative of the lump as a whole – we may get an inconclusive, or even incorrect, result.

In Barney’s case the fine needle aspirate was a huge help. The analysis suggested that his mass was likely to be a spindle cell sarcoma  – a malignant tumour of connective tissue . Although these tumours don’t tend to spread around the body, they do invade aggressively into surrounding tissues. While Barney’s lump may appear to have a very defined outline, there was a high chance that tumour cells were already spreading rapidly at a microscopic level. Because of this, the pathologist advised that we not only remove this mass as soon as possible, but that we take a wide area of normal tissue around the mass to try to ensure all possible tumour cells are removed. This was going to be a major operation.

Because of Barney’s age, we took a blood sample to ensure he could cope with the lengthy anaesthestic. Thankfully, this only suggested some mild liver and gallbladder inflammation so we booked Barney in for his op. On the day we put him on intravenous fluids, gave him strong painkillers and anaesthetised him. We then scanned his liver to confirm the gallbladder inflammation and then progressed to his operation.

Barney’s operation took about two hours. We removed a large amount of tissue from over his shoulder, including not only the mass itself but 3cm of skin, muscle and connective tissue from above, below, each side and deep to the mass. In reality, this meant that he was left with a defect 10cm in diameter over his shoulder, extending inwards to his shoulder blade itself. With the mass removed, we then had to carefully stretch the remaining tissues and bring them together to close the wound.

Barney had some strong pain relief in the few days following his op and was a really brave dog as he had to cope with a skin wound nearly 20cm long and very restricted movement of his leg. But gradually his skin stretched, his wound healed and he was, once again, a happy dog when he came to see us at the practice. It was a huge relief to us all when the lab informed us that, although the lump was indeed a spindle cell sarcoma, we had managed to remove all the tumour cells and there should be no recurrence of the tumour.

Since his op, Barney has done really well. He has had medication to improve his bile  flow, and his gallbladder inflammation has slowly resolved. His wound healed well and there is no evidence remaining of his pesky lump. He has been a regular face at the practice because of the occasional minor problem but his major operation clearly hasn’t stopped him enjoying his visits to see us. Although he had a nasty lump that could have been a life-threatening condition, he had a positive outcome thanks to his owner’s vigilant attention to detail.