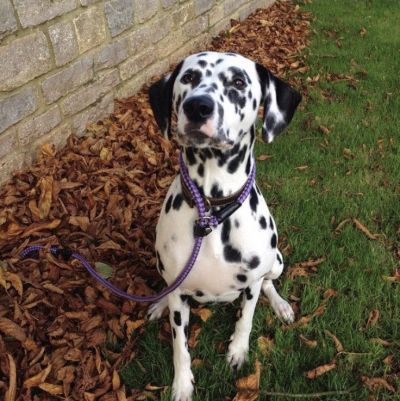 November Pet of the Month: Spotty

As all dog lovers know, no two dogs are the same. In fact, on of the endearing features of the species is that domestic dogs come in so many different shapes and sizes, as well as a huge variation in temperament, coat types and colours. So no matter what your feelings, there is generally a dog, pedigree or cross, to suit you. However, there are often also differences in their physiology too, meaning that certain dog breeds may be predisposed to certain medical condition – something that Spotty and is owners recently discovered.

Spotty is a rather splendid looking 7 year old male Dalmatian.  All was generally well with Spotty but in late Summer he started to show signs that urinating was slightly uncomfortable.  His owners witnessed this daily and so knew that he needed to be seen.  As such Spotty was brought in to be examined by the vet who took a urine sample and sent him home on pain killers to make him feel a little more comfortable.

The urine tests showed that Spotty had a heavy infection and so he was started on an antibiotic that was shown in the tests to be effective against the cultured bacteria.  We discussed with Spotty’s owners that urinary infections can occasionally be caused by another underling problem but, att this point, the diagnosis and treatment seemed straightforward. Everyone hoped this would be the end of Spotty’s painful urinating.

Spotty did improve but once antibiotics were withdrawn then signs of discomfort started to reappear and, over the following few months, Spotty had several visits and various tests conducted.  As things went on we started to become suspicious that he could be suffering from a very specific Dalmatian condition – urate bladder stones.

Dalmatians can have a defect in the ability of their liver to metabolise the uric acid which comes from proteins in the food. While other dogs convert uric acid into another substance, which is excreted from the body dissolved in the urine, Dalmatians tend to excrete uric acid unchanged. Because this uric acid is insoluble, it can build up in the urine and crystallise to form ammonium urate stones. These stones can be very irritant and even block the urethra.

We decided to perform an X ray and ultrasound of Spotty’s bladder, which did demonstrate some mineral deposits within the bladder. However, analysis of the urine at that time showed a different type of crystals in the urine, suggesting that the minerals in the bladder may have been a type commonly caused by infections, as opposed to the urate we had suspected. This confused the issue and we decided to proceed with management based on the crystals we saw, starting Spotty on antibiotics again, plus other medication to manage the infection and a special diet to try to dissolve the crystals and stones. We agreed with Spotty’s owner that we would review his response and warned that, if we saw no success, surgery may be necessary.

Unfortunately for Spotty this turned out to be the case and, one weekend, his urinary problems worsened as he started to struggle to pass urine.  We saw Spotty and passed a catheter into his bladder to empty his urine, which was a big relief for him. However, this was not a permanent cure, and we needed to decide on a long term solution for Spotty.

This time we had more information to work with – as we had catheterised Spotty we had managed to extract some sandy-looking deposit from his bladder. This was the first time was had actually seen any of the stone-like material and, while not a definitive test, it did look typical of urate deposits. This also meant that there were very likely to be more small gritty stones in the bladder and urethra, causing irritation and obstructing urine flow, as well as the larger stones in his bladder.

It was time for a lengthy discussion with Spotty’s owners. There were short term and potentially longer term issues to consider here, as this was a condition we would probably have to manage for the rest of Spotty’s life. With all this in mind we agreed to proceed to surgery and perform a double procedure. The first procedure would be a cystotomy – surgery to open Spotty’s bladder and remove any stones. The second would be a urethrostomy – a surgery to create a new opening in his urethra. This new opening would be higher up (where his testicles once were) which would mean that the opening would be in a wider part of the urethra and it would be easier for any future small stones to pass out, rather than blocking in the narrower part of the urethra in the penis.

The surgery was performed and all went well.  Spotty awoke with a new hole to urinate from and an empty bladder.  Whilst the first few days appeared a bit confusing for him, with urine coming out of a different site, after a week or so he was weeing with ease and seemed much more comfortable.  The stones and large amount of gritty material that were removed in the surgery were all sent to the lab and this finally gave us the definitive answer that they were indeed urate stones.

The surgery allowed us to manage Spotty’s immediate issues but also help in the longer term.  His new urethral stoma (hole) makes it more likely for him to pass small stones.  He is also on a specialised diet to help limit the potential for urate stone formation and in time we may also add medication that can further help this.  Spotty is back to being a happy exuberant dog and, with all of the above, we hope to keep him this way for a long time to come.