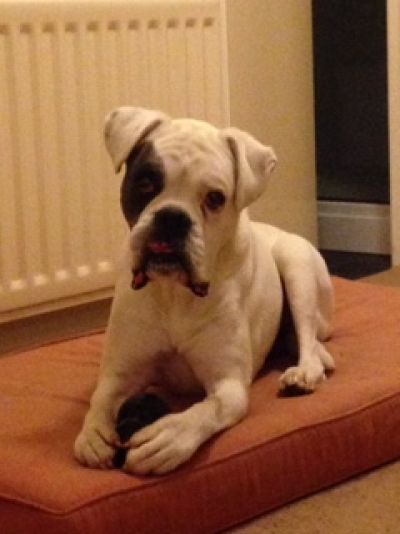 It was a beautiful, blustery Spring day in Cornwall. My husband and I were walking our Boxer dog along the coast path behind the beach near Padstow. Lots of other families were making the most of the good weather too, and Monster soon found a little Jack Russell terrier to play with. They darted back and forth, one chasing the other, then swapping around.  The terrier ran towards the edge of the path, with our dog in hot pursuit, and this is where the terrier’s local knowledge gave him the advantage. At the last minute, he swung left and stopped. Our Boxer was at full pelt and sailed straight past him, through the tough, salty undergrowth, and disappeared.   There was a stunned silence, then we ran to where he was last seen, and saw a 15 foot drop down to the beach.  No Boxer dog to be seen – just a dent in the damp sand, and a trail of paw prints leading off round the headland. I don’t think we’ve ever run so fast, but we found our lovely boy, a bit dazed and concussed but otherwise unscathed, playing with another dog on the sand.  Phew!

This was just one of many adventures we had with that lovely, if bonkers, dog.  I first met him through my work as a vet, in Bristol at that time. His breeder had brought in a litter of puppies for their first vaccinations, and while examining a boy puppy with a big brindle patch over one eye, we realised he was stone deaf.  Don’t tell my husband, but I decided there and then that I was going to take him home.  When my husband met our puppy for the first time, he exclaimed, “He looks just like John Malcovitch!”, and this name almost stuck, until he admitted that he’d end up calling him Monster or Bowser all the time, so we settled on Monster. No matter, he couldn’t hear his name anyway.

We lived in the countryside so it was easy to walk Monster in safe places away from roads, but he rarely went out of sight anyway. He taught me that dogs generally come back to you of their own accord, it has little to do with all the calling and whistling we do! He would respond with a tail wag when we smiled at him, and look abashed if we ever scolded him, which just goes to show what excellent readers of body language our dogs are.  Monster went to a normal puppy training class, and for years after there were 7 hearing dogs in that area of Bristol who responded very well to sign language! We developed signs for “Good Boy”, “No”, “Come here”, “Sit” and even a W sign “Weewees”. I lost count of the number of people who asked me, “Is he difficult to train because he is deaf?” “No”, I would reply, “He’s difficult to train because he is a Boxer”.

Monster’s first Medical Misdemeanour was at only a few weeks old, when he scaled the back door to get to a string of garlic hanging there. I rang the Veterinary Poisons Information Service, as I knew that onions are toxic to dogs, and the very helpful advisor told me that although garlic is toxic too, poisoning is very rare as dogs don’t tend to eat it. How could I be sure the dog had actually eaten garlic? Because I saw him do it in my kitchen, I admitted, ashamed.

The Cornish incident was to shape Monster’s life, in fact. It happened when he was about 2 years old, and a few weeks later he developed a stiffness in one of his knees. He was diagnosed with a Cruciate Ligament rupture, and underwent surgery. Now, I’m no orthopaedic surgeon, but the Meccano that was inserted into the joint by an esteemed colleague did the trick and he was better for a few months.  He became lame again, though, and this time he was referred to a specialist in Torquay for Arthroscopy (keyhole examination of the joint). This is when we discovered he had serious faults in the cartilage of both knees, and already had significant arthritis.  This is an uncommon but well recognised genetic trait in some male Boxer dogs.  Poor Monster.  Our crazy, bouncy dog, who used to jump like a stag over the stream near our house, would never be able to jump like that again.

But Boxers are basically happy, carefree dogs, and he just got on with life, albeit with shorter walks. Typical of his breed, he loved sleeping, and had it down to a fine art, some might say at County standard, if not National. He loved physical contact, and so physiotherapy sessions would almost send him into an ecstatic trance. He worked diligently on an underwater treadmill to build up and maintain his muscles and keep the joints mobile.  He took anti-inflammatory medication every day for the last 8 years of his life, which, fortunately, never caused him any problems; and he always took his joint supplements without a fuss.  I really couldn’t say that his quality of life was diminished at all; with management, he did very well indeed.

The following years didn’t go without incident, however. He had ingrowing eyelashes which caused an ulcer on his eye, and ended up with more specialist treatment.  We had to put drops in his eye every hour for 4 days, until it started to heal.

He had a few little skin tumours that had to be removed, and with perfect timing he would wait until one surgery had just healed before growing another.

At the grand old age (for a Boxer) of 11, Monster fell asleep on the sofa one afternoon, and was even more difficult to wake up than normal.  I saw his gums were very pale, and rushed him, my husband and our other dog, Bella the Labrador, to Shepton Vets. Greg the vet and Natalie the nurse were on duty, and leapt into action. We performed emergency surgery to remove a huge tumour on his spleen, which had ruptured and was bleeding internally. Bella was the real star of the day, though, as she lay perfectly still to donate blood to give Monster a transfusion.  By 9am the next morning, Monster was up and looking for his breakfast, and within a week you wouldn’t have known he’d been ill, save for the shaved patch on his tummy.

Now, splenic tumours come in two forms, the Nice and the Nasty, and both look exactly the same to the naked eye.  Nice ones rarely cause another problem once they’ve been removed, but Nasty ones will always return, and the average survival time in dogs is 3-4 months at best.  We sent a biopsy of Monster’s spleen to the pathology lab and crossed out fingers and toes, but it turned out Monster had the Nasty Kind. Once again, Monster just stayed jolly and had a great life right up until the end. I think people actually believed I was making things up when I told them he had cancer.  On Valentine’s Day 2018, he didn’t want to get up for only the second time in his life, and we knew that the tumour was back. We took him back to Shepton, where Josh the vet confirmed our suspicions with an ultrasound scan of Monster’s tummy. Natalie was on hand again with her endless compassion, and Callum, trainee nurse, gently cradled Monster’s head while he was sedated.

So, why am I telling you all this?

Firstly, Monster was, like all our dogs, the love of our lives for 12 years, and it’s given me the excuse to think about him for a couple of hours.

But owning him taught me so much, too. As a vet, when I see a client with a new puppy or kitten, I know the utter joy they are feeling and how precious that little bundle is.  I understand that prescribing a course of treatment means someone is going to have to remember to give those tablets at the right time every day, even if that means getting through a lot of cheese/ liver pate/ peanut butter and so on.  I’ve received bills from the (many!) specialists we’ve seen, and felt the mixed emotions from “How much?!” to “Thank heavens we could get that treatment for him” to “Thank all that’s Holy he’s insured!”  I’ve spent 11 years of my life avoiding wearing black trousers because I couldn’t leave the house without getting white dog hair and dribble on them.  I’ve realised that dogs let their owners worry about their health problems while, with good management, they themselves just forget about them and get on with their daily business of sniffing, sleeping, walking, eating and licking unmentionable parts of themselves.

And that’s what my job is all about.  I’m very lucky.