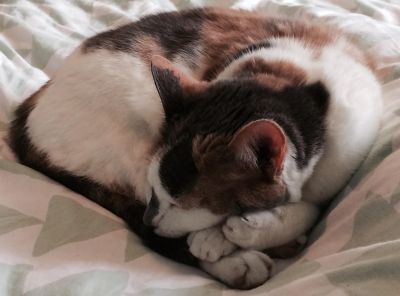 Meet Luna, a beautiful tortoiseshell domestic short haired cat, who was adopted by her owners from Happy Landings when she was a kitten, 10 years ago. A few months ago, Luna’s observant owners noticed that she was ravenously hungry all the time and despite this, was rapidly losing weight which prompted them to bring her into the surgery for a consultation.

At the practice we thoroughly examined Luna and discovered alongside the weight loss, that she also had an incredibly fast heart rate, much higher than normal (even for a cat at the vets!), a heart murmur and a palpable mass in her neck. This combination of presenting problems and clinical findings made me highly suspicious that Luna had a hormonal condition known as ‘Hyperthyroidism’ so to confirm it, we took a sample of her blood to measure the amount of thyroid hormone within it. When we got the results the following day it did indeed confirm our suspicions.

Hyperthyroidism is a condition seen quite commonly in cats, it means that they have too much thyroid hormone in their blood. The thyroid hormone is involved in the bodies metabolism, so when there is too much, the metabolism is greatly increased which means the body is constantly hungry and use it’s fat and muscle stores to feed itself causing weight loss. It also means that the heart beats really quickly to keep up with the high metabolism and because the heart is beating so fast, the blood flow through it is really turbulent causing us to be able to hear a murmur when we listen with our stethoscopes. The thyroid gland is situated in the neck and typically, in cats that are hyperthyroid, the gland is grossly enlarged which is exactly what we could feel when we examined her.

There are a number of ways to manage hyperthyroidism, there are tablets and liquid medications, there are surgical procedures and there is a specialist option offered at only a few places in the country, one of them being Langford Veterinary Referral Hospital near Bristol which uses a radiation technique. After discussing the options at length with Luna’s owners, we decided that performing a surgery known as a ‘thyroidectomy’ (which literally means removal of the thyroid gland) was most appropriate but due to her currently increased metabolism, it would be best to control her initially with some medication to make her a safer anaesthetic candidate. After two weeks on the medication Luna appeared to be doing really well, she had gained some weight and a repeat blood test showed us that her thyroid hormone levels where back down to a normal level so a date was set for the surgery!

However shortly afterwards Luna became quite unwell, she was really quiet and unhappy, vomiting multiple times a day and her weight started falling again. We decided that it was best to stop the medication and reschedule her surgery for a date much sooner. The morning of her surgery finally came around and Luna was still poorly but we knew that once that pesky thyroid gland was removed she would be feeling a whole lot better. I had spent the previous evening preparing and planning the surgery and was hugely grateful to have Martin on hand to guide me through the stages and thankfully it all went smoothly without any complications. As with all surgeries, we like to check up on our patients post-operatively to ensure all is healing as it should be and we were all very relieved to see Luna improving rapidly, she had stopped being sick, her appetite was back and she was gaining weight again! Two weeks after the operation we took another blood sample to remeasure her thyroid hormone levels and also to check her kidney function too. This was because a common side effect of controlling the thyroid levels is reduced blood flow to the kidneys, which, if they’re not functioning properly, will unmasked signs of kidney disease. Thankfully Luna wasn’t suffering from any kidney disease either and can now lead a normal, healthy cat life without the constraints of daily medication.