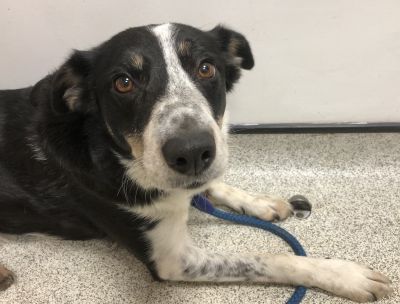 I’d like to say that nothing is a surprise to us in our job – that we always have full knowledge and control of all that is right and wrong with our patients. However, the truth is very different, and the only part of our job that I am now not surprised by is when our patients do things that completely baffle and confuse us. In fact, this can be when the work is most interesting.

One such extraordinary patient is Gin, a 6 year old female border collie who is not just a very much-loved pet but also a working dog, herding cattle on her owner’s dairy farm – a job she absolutely lives for.   As such Gin is an incredibly active, fit dog who is always on the go.  So when she seemed less keen than normal on her daily activities her owners knew she was just not right and, with Gin not eating and distinctly subdued, they brought her to see us. Little did any of us know that this was the start of a medical issue that would not be resolved for over a year to come.

When we examined Gin we found she was depressed and had a very high temperature but we could find nothing further to explain her symptoms. We decided to admit her for supportive treatment of intravenous fluids, anti-inflammatories and antibiotics, as well as further investigations. For the moment, we could only keep Gin comfortable and hydrated, and control her temperature.

In the meantime, her blood tests showed us that her white blood cell numbers were incredibly high, responding to an infection or inflammation somewhere. Otherwise the rest of her results were pretty normal, which was good news but did not tell us the cause of her symptoms. However, Gin’s condition was starting to develop rapidly, so that it was becoming clearer what was wrong – and it was a big concern.

Gin was developing multiple skin wounds on her chest, with areas of dead skin and fluid discharge. Even more alarming was the rate at which these wounds were appearing – each time we returned to check on Gin every 15 minutes she seemed to have developed a new sore. Before long most of her lower chest and left side were covered with wounds, which were starting to merge together.

These symptoms were drastic and concerning so we needed to have a serious conversation with Gin’s owners. Our assumption was that Gin had managed to acquire a penetrating foreign body, such as a thorn or twig, while running around in her daily routine. This sort of injury is not always evident straight away, but the foreign material and bacteria that are punctured through the skin can fester until the body’s reaction becomes overwhelming and tries to break out. Perhaps this had been a minor injury initially, but our concerns were that the resulting infection was so severe, and Gin was so ill, that she was likely to be suffering badly and may not survive.

Gin’s owners wanted what was best for her.  They cherished her but couldn’t bear to see her so unwell, so they decided to consider this difficult dilemma overnight. We all had a worrying and upsetting night, but in those 12 hours Gin started to improve. Her wounds stabilised, her temperature came down and she became more responsive. She wasn’t out of the woods but we felt we had been given a bit more time to assess her condition.

Gin had a very large region of dead skin that was decaying, so we knew we would need to remove all the diseased tissue and clean her wounds, under a general anaesthetic, for her to stand any chance of healing.  However, we couldn’t do this without being sure that her wounds wouldn’t spread further and that all the dead skin was evident. So, with Gin much brighter, she was bandaged and sent home on medication for 48 hours before further assessment, which gave her owners some time to think.  We knew this would be a difficult and lengthy condition to treat, with no guarantee of a good outcome. They needed to consider whether it was right to undertake this for Gin.

Gin perked up even more once home and determined her own destiny.  Her owners told us that she had looked into their eyes that evening and convinced them that they wanted to continue her treatment. They were prepared for the long road ahead.

Two days later, Gin underwent her procedure to remove all the dead skin and clean the area, leaving an extensive open wound. We then placed a special dressing that would strip away any further dead tissue when it was removed, leaving healthy tissue behind.  This was repeated daily, under anaesthetic each time, until we were left with a healthy healing wound.

Gin had gone through a lot of treatment already but had only come to the stage where she could begin to heal. We didn’t yet know if she would require more surgery but the more immediate dilemma was how we should dress Gin’s wounds. 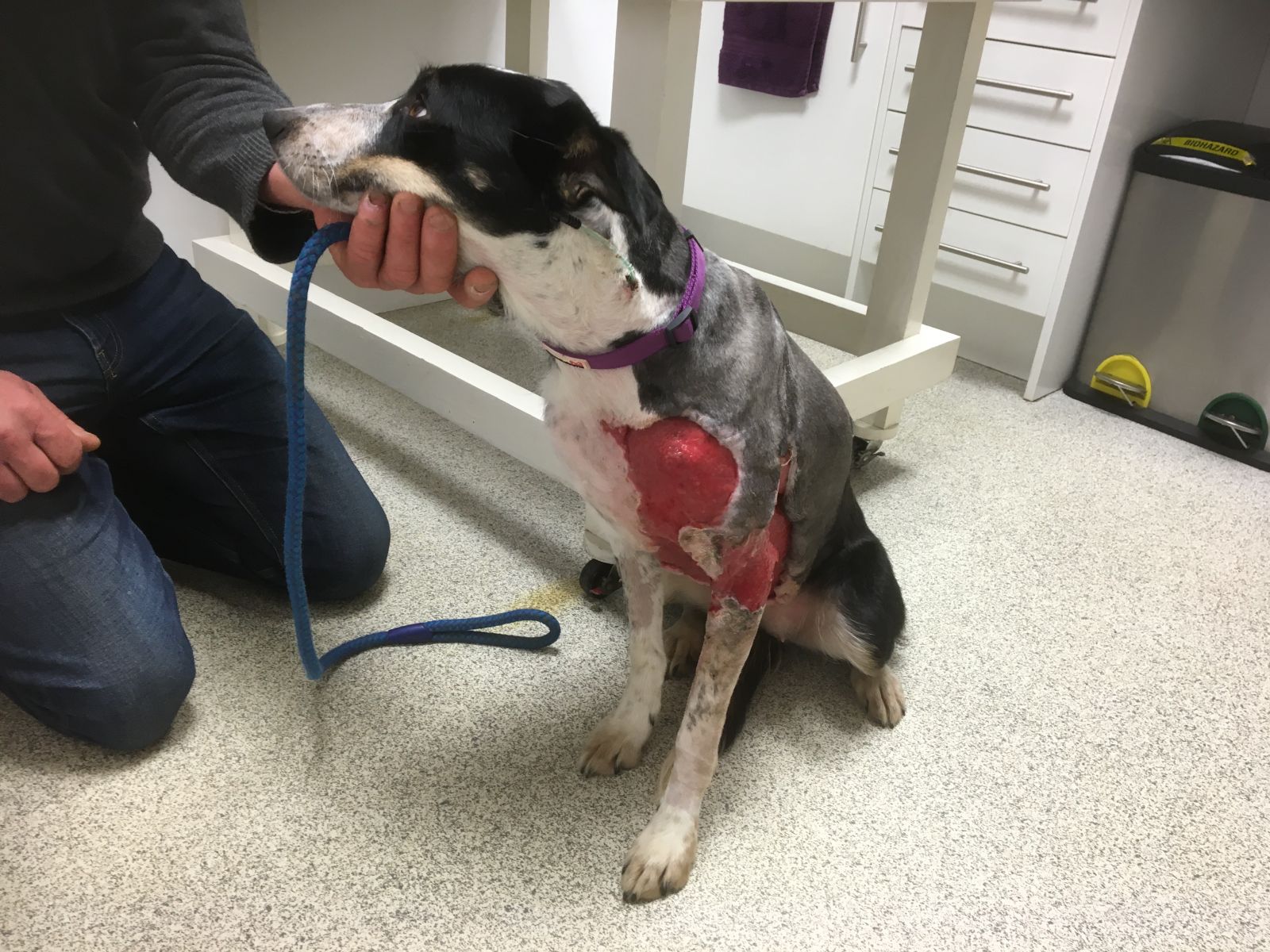 Veterinary dressings are designed for the more usual, smaller wounds we encounter and are also not cheap. To dress such an extensive wound for a long period of time could easily become prohibitively expensive in dressing materials alone so our challenge was to find a more cost-effective and practical approach to cover such a large area and still encourage healing. With this in mind we opted for an innovative combination of veterinary lubrication gel, cling film, absorptive incontinence pads and, finally, a simple T-shirt. Gin’s owners worked with us to apply the dressings and perform two dressing changes a week at home, cleaning the wounds each time, so that Gin only needed to pop into the practice for the occasional assessment.

Once again, Gin amazed us.  On every inspection the change was startling, with the wound getting considerably smaller.  Gin seemed very happy with her new attire and was even keener on the additional chicken and eggs that she was getting in her diet to supplement her protein levels.  As Gin continued to heal over many weeks, her dressings became easier to apply, but we could see that her front leg was becoming restricted in its movement due to the scar tissue forming around it. In the big picture we felt this was a complication that was manageable.

After nine months Gin was left with only a 50 pence-sized wound and a restricted forelimb. At this point we felt that further surgery might help with both and her owners were happy for us to proceed. The surgery was difficult and we had to be careful not to damage some major blood vessels and nerves supplying the leg, but we did our best to remove as much of the fibrous tissue as we could. We were hopeful that our efforts would have some benefit. Gin was discharged with a list of physiotherapy exercises and a plan to gradually resume some light herding duties.  This was something that Gin was very happy to accept and her owners were delighted by her progress.

I was lucky enough to see Gin for her routine vaccination in the last few weeks.  She walked in joyfully and at first glance it would be difficult to know that anything had ever happened.  She does still have a slight limp, and isn’t quite as quick as she once was, but she still enjoys her work and now even has a partner  - a male border collie suitably named ‘Tonic’.  Seeing how well she looks is a testament to all the hard work her owners put in and makes the thought of her very close call inconceivable now.