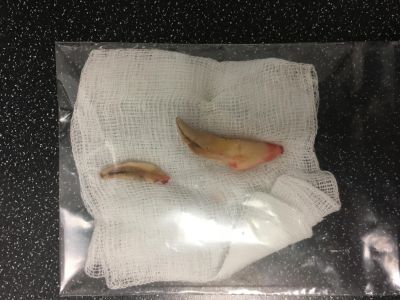 Toothache in our pets is a difficult one for both owners and vets to assess. Often cats and dogs will still have a hearty appetite and will simply learn to eat around the painful tooth and avoid the crunchy bits, much like you and I. The causes of toothache in cats and dogs most typically are associated with plaque build up which causes an inflammation to the gums, known as gingivitis. When this is sustained over months and years the tooth roots are slowly damaged until the tooth becomes loose. Pockets around the tooth root, where the gum should be, can become havens for infection, which further damages the tooth and gums, and then, the tooth falls out. Of course this isn’t the only reason, the other common dental condition is tooth fracture.

Harvey came to visit us at the vets after his owners noticed some swelling around his chin, he was also drooling more than normal and when the owners looked into his mouth they thought there was something wrong with one of his lower canine teeth. A thorough examination of the mouth can be difficult in any conscious animal, but for Harvey it was made more tricky because there was significant discomfort in his mouth and naturally he didn’t want anyone prodding or poking around in there.

In order to fully comprehend what was going on, we had to give Harvey a general anaesthetic. Once he was safely asleep, we discovered that he had split the crown of his canine tooth in half, there was absolutely no doubt that this was the problem, which meant for one thing only, the tooth had to come out.

Removing a canine is no easy task, especially when the reason for removal is sudden and traumatic rather than a long-term issue because the tooth is very well attached to the surrounding soft tissues and jawbone. The canine tooth is also very large, the crown which is the part that we can see on the outside, is only about one third of the length of the tooth, the other two thirds is made up of root and is deeply buried in bone.

In order to remove the tooth, I firstly had to carefully breakdown the soft tissues that attach the gum to the outside of the tooth. Once I had freed up enough of the soft tissue, I had to cut into the gum and gently separating it and peeling it back, creating a large flap of gum tissue to expose the bone. Once the bone was visible, it was time to get the dental drill out and cut into the bone in order to visualise the large tooth root. At this stage we could identify all the canine tooth from root to tip so all that was left to do was to slowly, carefully and gently, breakdown the periodontal ligament. This holds the tooth root to the bone and is incredibly strong!

Finally after nearly three hours, the tooth was out, the gum had been stitched back together and Harvey was waking up, ready to go home with some pain relief and a very soft food diet for the next couple of days whilst everything heals up.

The take home message is that, like Harvey’s owners, it is really important that we regularly take note of our pet’s teeth and dental hygiene because they don’t always show us obvious signs of oral discomfort