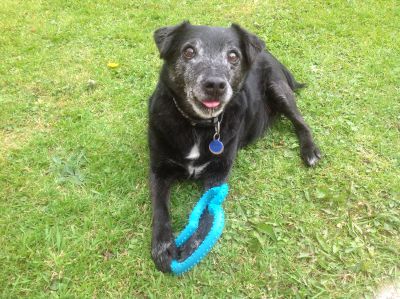 Pet of the Year Finalist: Nigel the terrier had calcium overload

Calcium is known to be an important mineral in the body, for healthy bones as well as nerve and muscle function.The circulating levels for this reason are well controlled, and it can be a real danger if levels drop, but as much loved patterdale cross Nigel experienced, high calcium can also cause its own problems.

Nigel is an older chap, and although as a rescue his true age is unknown, it is thought he is approaching 14 years of age. So Nigel’s owners started to understandably worry once his appetite was waning and he started to really slow up on walks and around the house. To add to this, the final straw was when Nigel’s thirst and urination increased, so it was time to visit the vets. An initial examination didn’t find any answers to his problems, so a blood sample was taken, with a concern that his kidneys may be beginning to struggle.

However when the results returned the following day, it was not his kidneys but his calcium that proved to be the trouble with Nigel. Blood tests revealed his calcium levels to be too high, which explained his symptoms as high calcium results in lethargy, reduced appetite and urine that is too dilute. Once this issue was discovered, the reason for these raised levels needed to be found so that they could be returned to normal. A major concern was cancer, as three types of the malignant disease can give the side effect of high calcium. It was decided that X-rays would be taken of Nigel’s chest and belly to survey him for any obvious tumours – fortunately he got the all clear.

The next step was to look for more uncommon reasons for a raised calcium level, and this involved a further blood test. Calcium levels in the body are controlled by a gland in the neck known as the parathyroid, situated right next to the thyroid gland. These glands produce a hormone which increases circulating blood calcium. High levels of this parathyroid hormone (PTH) can be caused by kidney disease, an inappropriate diet, or primary disease of the glands. As Nigel’s kidney function and diet was OK, when the blood test revealed a raised PTH level, it was confirmed that Nigel was suffering from the uncommon condition known as hyperparathyroidism.

Hyperparathyroidism is caused by an enlargement of the calcium controlling neck glands, and the only treatment was surgical removal of the affected area. This meant that to cure Nigel of his symptoms, he would have to go ‘under the knife’ – a decision not without its risks, not only because of his age and general anaesthetic, but because the post-op issues following the surgery could be life threatening. Removing the affected tissue was likely to cause Nigel’s calcium levels to go the other way, and fall to potentially fatally low levels, so if he was to undergo surgery, close monitoring and blood tests with regular supplementation would be crucial.

With a difficult decision for his owners to make, Nigel’s symptoms were worsening and he was becoming quite miserable. To save him the only option would be the surgery, so after weighing up the risks he was booked in for his procedure. Once anaesthetised, surgery began on Nigel’s neck, and it soon became clear that the right side of his gland had an obviously enlarged area. This was carefully and delicately removed, and sent away to the pathology lab for testing while Nigel recovered under watchful eyes of the nursing team.

Despite his senior years, Nigel recovered very well and he was fit enough to be monitored at home. He was discharged with regular medicines – calcium and vitamin D so that he wouldn’t be in danger of the life threatening consequences of low levels that could cause a coma or seizures. The vitamin D is only available in a human preparation of liquid capsules, whilst the calcium was most available in a specific measurement of powder, both of which needed to be carefully measured out and divided up, meaning that formulating and dispensing his meds would be frustratingly difficult and time consuming, but very worthwhile! Nigel was monitored for signs of low calcium, such as panting, facial rubbing and tremors – but none of these issues were seen as he bounced back amazingly well.

Nigel spent the next few days in the practice with the nurses in tow, and his regular blood samples were all on track. He spent everyday of over a week visiting us and in time his calcium levels raised, stabilised and levelled out. At this point Nigel was back to better than ever, cured of his condition and weaned off his capsules. After the brave decision of surgery that they had taken, Nigel’s owners could look forward to the rest of his happy, healthy life.