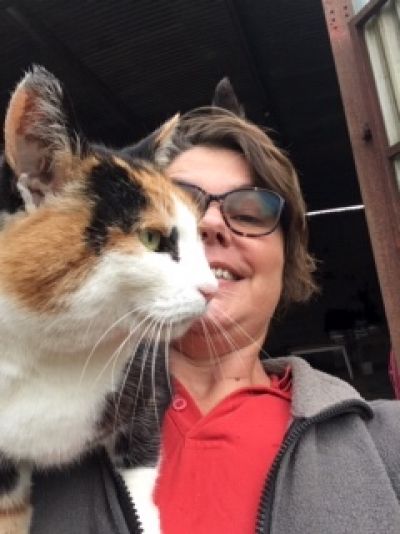 I suspect very few people are aware of the number of feral cat colonies that exist in our area.

Many start from abandoned cats or kittens, or from unneutered cats that wander away from home and become lost.  Sometimes a well meaning cat owner has allowed his or her pet cat or farm cat to breed, but been unable to find or rehome all of the kittens before they themselves hit adolescence and start breeding too.

An unneutered tom cat can start breeding from as little as four months old, and can mate with an almost unlimited number of females in his territory.  Unneutered female cats (known as “queens”) can also become sexually mature from four to five months old, although having kittens this young can be a risky business for them, as they are not yet fully grown themselves.  A litter is usually between two and six kittens.  Pregnancy in the cat lasts about nine weeks, and the queen will come back into season about two weeks after having kittens, and she can become pregnant again even if she is still feeding her babies.  Left to their own devices, cats tend to breed in the Spring and Summer, although some queens can come into season later in the year and have litters in the winter.

But hey, wait there, the female kittens born in May or June are able to have kittens themselves by the end of the season.  Half of the kittens born will be females, so 6 more lady cats are going to have an average of 4 kittens each that summer, too. 24 MORE kittens.

How many cats will you have by Christmas?  Including the original two, there will potentially be THIRTY EIGHT cats! There’s a new feral colony in less than a year.

Feral cats aren’t like pet cats. They aren’t used to humans or being handled. They don’t have the benefits of vaccinations against cat ‘flu or feline infectious enteritis, so they often carry and succumb to these infections.  They pick up parasites, including tapeworms and roundworms, from the small mammals and birds that they hunt, and in large numbers these can weaken the cats.  Many are also born with abnormalities due to being inbred (such as brothers mating with sisters).  If a feral cat is weak, he can’t hunt and eat to keep himself alive. Infighting and breeding also makes infections like FIV (the cat equivalent of HIV) prevalent in many of these colonies.

But they can live a good life with a little help.  Neutering feral cats can massively benefit not only the cats themselves, but the humans around them, local pet cats and wildlife.  Neutered cats can’t breed and are less inclined to fight with each other, and this reduces the spread of many viral infections.  Neutered females are spared the stresses and risks of repeated pregnancies.  With the number of cats in the area staying stable or dropping, there are plenty of resources available for everyone, such as food and safe places to sleep.  And all of these factors put together mean the cats are healthier, better fed and less stressed, so they re less likely to succumb to common infections  like cat ‘flu.

Farmers traditionally kept cats to keep the rat and mouse population at bay, and neutered feral cat colonies can still fulfil this vital role, without numbers spreading out of control.  I can vouch for this: a cat appeared at my smallholding two years ago, and chose to live in our stables.  She has the option to come in the house, but has always chosen to stay outside, sleeping up on the hay stack in summer, and in a well insulated den on top of a cupboard in the winter. Since she has arrived, we have had no evidence or rats or mice at all, in sharp contrast to a real rodent problem before she took up residence.  For those interested, she is a beautiful chubby tortoiseshell called Phyllis.

Since our Wells practice opened in October, we have been helping our wonderful local Cats Protection, by neutering feral cats. Landowners can approach CP about feral colonies living on their land, to discuss how they can best help. Cats are then humanely trapped and brought to the surgery.  Most of these cats cannot be handled, so we check them visually, anaesthetise them, then give them a more thorough physical exam. We castrate the males and spay the females. If they have obvious fleas or worms we treat them for these.  A critical number of each new colony are tested for FIV and FELV infections, as if these are present then the whole colony is likely to carry the infection, and CP will manage them a little differently.  Once this is all done, each cat has a little notch made at the tip of one ear, so anyone can see that they have been neutered, even from a distance.  The cats are kept in overnight, either at the surgery or with a volunteer, to check they have recovered fully, before being released where they came from.

Since we opened in October last year we have checked and neutered nearly 60 feral cats through Cats Protection.  We take our hats off to all of the wonderful volunteers who spend their evenings and early mornings watching, feeding and enticing, in all weathers, in all sorts of conditions, then ferrying to the surgery. They carry cats in their own cars, and keep them at home overnight if necessary, despite the smell and the mess and the hissing and growling!

Let’s hear it for ALL the animal welfare charities and their volunteers. May we all continue to support them and the wonderful work they do.

If you need help with neutering either a colony or your own domestic cat, please contact Cats Protection on 07833 634087 or email julia@straymoggie.co.uk.

If you would like to volunteer as a trapper or fosterer for Cats Protection please call 01749 850660 or email gill@straymoggie.co.uk.