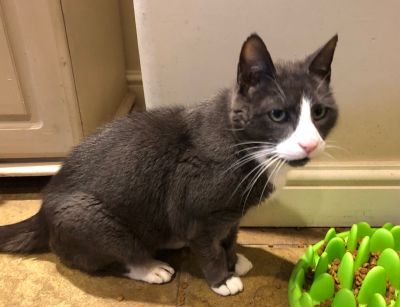 When vets pets get sick

Occasionally we end up experiencing the practice from the other side of the consulting room table. When our own pets are ill, our veterinary knowledge helps, of course, but we also feel all the same worry and distress as any other owner.  I recently experienced this as one of our beloved family cats, Jinx, was unwell.

Although they are unrelated, we took on Jinx and Parker as kittens within a few months of each other, when I was only a year or so into my veterinary career. Fifteen years on, they have been very much key members of our family, present through several house moves and the arrival of our three children. They are simply brilliant cats. Parker is greedy, prone to weight gain and loves a cuddle more than anything. Jinx is lively, lean and muscular and is less needy but has a rumbling purr when he gets some fuss!

Like many owners of senior cats, I still think of Jinx and Parker as the kittens they were when we got them, as they are just as full of life – it’s easy to forget that they are fifteen. I have to remind myself to keep a close eye on their health at this age, watch their appetite and water intake, monitor their mobility and check their weight.

So when we noticed that Jinx seemed to have lost a bit of weight it was a bit of a worry. Although he had no other symptoms at all, his belly was a bit sucked in and his hip bones a little too easy to feel – readily noticed on a cat so naturally slim anyway. We decided we should bring him into the practice at some point to weigh him, but in the meantime we would give him some extra food and make sure that Parker hadn’t simply been stealing his ration. This seemed to help for a few days, as he filled out a bit and I thought perhaps I had imagined things, but then Jinx seemed to become a bit picky with his food. As he still seemed very bright and happy, we planned to run some blood tests  – often a helpful first place to start in any older, unwell cat – and I got ready to bring him into work on my next day off.

Within 24 hours however, the situation had changed and Jinx suddenly deteriorated. He stopped eating completely and lost his usual vitality. In a very short space of time he looked thoroughly miserable, he was dehydrated and lost much of his muscle condition. We knew that such a rapid deterioration, and especially a rapid loss of muscle mass, is usually a sign of serious illness in an older cat so I took him into the surgery immediately.

With the help of Nurse Faye we placed an intravenous catheter so that we could start Jinx on fluids and took a blood sample to send away to the lab. We weighed Jinx and were shocked to find that he was only 3.5kg, while he would normally be closer to 5kg. We conducted a more thorough clinical examination than we had done at home but found no clues as to the cause of Jinx’s condition – his heart and respiratory rates were normal, his lungs sounded clear, his abdomen was relaxed and his body temperature was normal.  For the moment, there was nothing more to do but settle him into the cattery ward and monitor him closely.

Throughout the day, Jinx did very well. His intravenous fluids did their job as his dehydration corrected, he was passing urine and faeces normally and, with Faye’s calm encouragement, he started to eat a little recovery food. As he seemed to positively enjoy his stay in the ward, we opted to keep him in. Meanwhile, we were not doing so well, as we anxiously waited overnight for his results, running through all the possibilities in our minds.

The following morning Jinx was back to his normal self and was definitely ready to come home. When his results came through, they were a big relief but also a worry – Jinx’s biochemistry results were remarkably normal for such an unwell cat, ruling out the common concerns of kidney disease, hyperthyroidism, diabetes and liver damage.

While this was good news, we were worried that Jinx’s problem was something not easily detected on a blood test, and in an older cat we had to be concerned about the possibility of a tumour. What’s more, there were some abnormalities on his haematology – he had a very high level of white blood cells, with a pattern that suggested a long-standing infection or inflammation. This could mean a variety of conditions but, again, could be consistent with a cancerous condition. We knew that the next step for Jinx would be xrays and ultrasound scans to look for a mass within his body. However, as he was doing so well after his treatment, and because we knew there was a chance that his blood results could have indicated a chronic bacterial infection, we decided to start him on a course of antibiotics in the meantime.

As it turned out however, we did not progress to the next stage, as Jinx went from strength to strength from that moment on. He responded very well to the antibiotics and seemed like a new cat within a few days. His appetite flourished as he seemed to love his new recovery food, and he seemed happier and livelier than he had for a long time. After two weeks we tentatively stopped his antibiotic treatment and watched him closely for any sign of a relapse, but there was none.

Several weeks down the line, Jinx is still doing well. He is back to his normal weight, has an appetite to match Parker’s and is still managing to catch the odd small rodent despite his age. Although we are keeping a close eye on him and will do further tests if he develops any symptoms again, it seems that his illness was indeed most likely to be an infection, possibly a subtle case of chronic pneumonia or pancreatitis.

Going through this experience with Jinx has certainly renewed our appreciation of our golden oldie felines, and has been a sobering reminder of what our worried owners go through. Jinx’s case also emphasises some of the key advice I give to owners of older cats. Firstly, that signs of illness in older cats can be very subtle until it is advanced. Secondly, because of this, regular health checks are vital to detect those subtle changes such as weight loss. And finally, when we find any concerning symptoms, investigating these is not something to be frightened of – in many cases we can reassure you that nothing is wrong, or we find something very treatable, but even if we diagnose a more serious problem, early detection and treatment can make a world of difference to both quality and quantity of life.