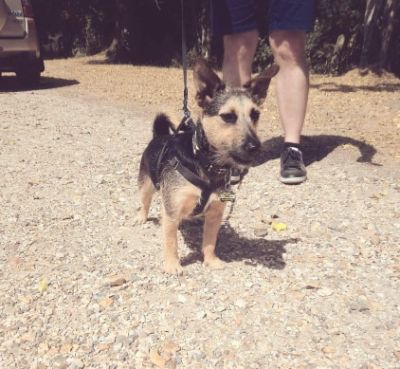 One damp Friday afternoon in February, Bruce the Jack Russell Terrier was out and about exploring in the garden when his nose caught a good scent, he started digging and came across a long lost rawhide chew! Filled with what we can only assume was eager joy he swallowed it whole before his owner was able to retrieve it from him. His owner, very aware of the risk of rawhide chews, was sure to keep a close eye on him and rightly so because within the hour he started retching and vomiting up bile several times. A quick phone call with the vets and it was advised that it was best that he was examined, sooner rather than later, so with that, Bruce and his owner made their way to the practice to see vet Josh.

Josh checked Bruce over and although he appeared very bright and his normal energetic friendly self, there was concern that the chew would be too big to pass through and his vomiting efforts so far had been unrewarding in trying to bring it up. The best option for Bruce would be to go in and retrieve it.

For this procedure there are two options, either surgical entry into the stomach to remove the chew or endoscopic removal. Thankfully at Shepton Vets we have the means to be able to do endoscopic procedures, meaning that we can send a camera with an instrument channel, down the oesophagus (the food pipe) into the stomach and then on into the intestine if we need to allowing us a minimally invasive technique to image and sample any suspicious tissues but also to remove unwanted structures, such as the chew.

Bruce was put under a general anaesthetic and a radiograph (xray) was taken of his abdomen. In this image we could clearly see a white (radio-opaque) structure that wasn’t part of Bruce’s normal anatomy located in his stomach which we were quite sure was the culprit. Happy enough we proceeded to send the gastroscope down his oesophagus. Upon entering the stomach, we could see immediately the large, whole piece of rawhide chew that Bruce had swallowed. At this point all we had to do was pull it out through his mouth, easier said that done. Due to the acids in the stomach, the edges of the chew had become very slippery and difficult to grasp hold of with the usual grasping forceps so we had to perform an alternative technique whereby we placed a different pair of grabbing instruments down the oesophagus independently of the camera. This took a bit of manoeuvering but eventually meant we could get good hold of the chew and carefully remove it.  To double check we had removed the entire offending chew we took another radiograph afterwards which confirmed that the radio-opaque structure previously visible was no longer present.

Had we not had the facilities to remove the chew endoscopically, we would have been forced to remove it surgically, a significantly more complicated, risky and lengthy procedure that would have resulted in much more post-operative care. Thankfully for Bruce, he quite literally bounced back from his anaesthetic and we were all happy enough for him to go home that same evening under close observation and some gastroprotectant medications. I’m glad to report he is doing very well and continues to be his normal, very bright little self!